Damn, I swear its on its way My nuts are wet
Turns out that maybe that Waterskiing Squirrel isn't all its cracked up to be. BigFib.com is reporting that Argus Wingdale III was unable to waterski.

"PARKSVILLE, AZ - Area squirrel Argus Wingdale III has been unable to water ski since his birth nearly two years ago. While most other squirrels in his community have become celebrities in local news reports, Wingdale lives a lonely solitary life due to his lack of talent."

Links:
Squirrel Sadly Unable To Waterski (BigFib.com)
Posted by Rowboat Abides on May 24, 2007 No comments: Links to this post

Email ThisBlogThis!Share to TwitterShare to FacebookShare to Pinterest
Labels: The Industry Its the infinite irony huh?

If anyone has seen the Twilight Zone then you know what we are talking about, the man wants to be left alone to read, there some assplosion where everyone dies or whatever and he has his books and no one to bother him and he breaks his glasses.

Well, thats how we are feeling at the Rowboat right now.

...ugh...if you just think the exact opposite.

We promise the Ultimate and Complete re-cap of All-Stars, the Night Jump and the Kurtis Award winner will be up soon...hopefully.

In the meantime, if anyone happens across our site here and wants to share some stories about All-Stars, please comment away or send an email.
Posted by Rowboat Abides on May 23, 2007 1 comment: Links to this post

Email ThisBlogThis!Share to TwitterShare to FacebookShare to Pinterest
Labels: Bitch and Moan Collegiate All-Stars....just a couple days away. Here is the stuff from NCWSA.COM...is that supposed to be all in quotes?

"Borderline Lake is one of Washington's premiere private waterski lakes. It is located 20 minutes north of Bellingham in the city of Blaine, WA. There is plenty of on-site parking at the lake as well as ample room for spectators. Camping at the lake is only allowed by special permission. Address: 8610 White Rd, Blaine, WA 98230.

Friday, May 18th
--Practice ALL DAY starts at 8am
--Salmon dinner at the Lake

Links:
All-Stars (NCWSA.COM)
Posted by Rowboat Abides on May 15, 2007 No comments: Links to this post

The idea of the 100th post post, was to look back at what we have done in now just over the course of a year.

But, those of us who strong-arm the man at the CRB we aren't ones for looking back...only forward towards the future.

Here is some things that we think should, will or may happen as we go forward.

You have a problem with purple? Screw you buddy.
1) Sammy Duvall takes over as head of USA Waterski. Why not Andy Mapple like we suggested before? Because in thinking about it, Sammy Duvall has more name recognition, runs a successful "ski school" at Disney and...oh yeah, has name recognition. People who don't ski have a much better chance of knowing who he is then Andy Mapple. No disrespect Andy, but, Sammy is the man. 2) Collegiate Waterskiing. Of all the various disciplines in the world (besides wakeboard) collegiate skiing seems to really be finding a strong and solid niche. It has a sort of frat party / get drunk and ski / screw :) vibe that does two things. 1) Make it fun and 2) piss off the uptight brigade. But with it getting some TV love. we can see some very cool places for collegiate skiing to go. Specifially, it would be cool if the powers that be saw what makes the sport so good and exploit it...in a way. Promote it as a party with some skiing....some world class skiing...or some mediocre skiing depending, but, get the word out. Get it on tv, get it to the intertubes, spread the love. Because, lets be honest, if you were in college...you got some love. 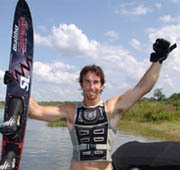 Smells like someone died...SUCK IT HOLIDAY!!
3) Waterskiing online. The only logical place for our sport to go...again besides wakeboarding. But, lets be honest, untill someone antes up some dough and makes a tournament or tour that is somewhat easy to follow and packages it in a way that someone can digest then it will never work on tv. So, the Puter is the way to go. If you remember when Waterski Magazine did the webcast slalom battle rap fiasco (which was one of our favorite posts...with the immortal line "SUCK IT HOLIDAY!") but, thats a good start. Put it online, during the week so those of us who sit in a fucking cubicle and waste our lives away have something to watch.

From there, maybe it can be expanded to the tv. But, with the increasing technology in that world and the ability to stream everything live to your computer, tv, lappy, phone, etc, it just makes sense to jump on it now.

4) What else? I know there are some of you out there. Comment. What do you think is going to happen, what do you think should, what would you like to see? I want to see Adriana Lima in a swim suit running 28 off. You?
Posted by Rowboat Abides on May 01, 2007 5 comments: Links to this post