Easy On Your Wallet Huh?

"BREAKING NEWS PEOPLE!  THIS JUST ACROSS THE CRB NEWS DESK, BOATS THAT USED TO BE EXPENSIVE ARE NOW NOT!  WITH MORE ON THIS WE GO TO OUR REPORTER THAT IS FOR SOME REASON IN BLACK AND WHITE AND 50 YEARS AGO AND SMOKING, TAKE IT AWAY CHET!"

"Thats right crew, it is now without question the right time to buy a wakeboard boat.  We received word just earlier that blew our panties right off ours and yours dicknballs, and it was that $100,000 is no longer alot of money, its in fact cheap.  Matter of fact if you don't have this sort of money just sitting there waiting to be spent on a boat you are in fact a creep and a loser and a dirtbag.
Lets go to our sources that prove without a shadow of a doubt that we are correct, you are wrong you are also stupid, and you smell bad and at best you make a mediocre turkey sandwich"

If you don't want to click, or don't have the twitters or whatever, the email said that the Axis T220 wakeboard boat is cheap / entry level easy on your wallet at just shy of $100,000 and we had the reaction like the chemical blasted guy in robocop.
Thanks to the CRB social media journalists for uncovering this hidden amazingness, by simply checking their email.
But, seriously, $100,000 is an awful lot of money and we are not sure what it actually says that the amount of money in question is considered on the lower end.
Its SO MUCH!
But, is it??
We tend to view somewhere in the neighborhood of the late 90s as a time when the price of things made sense, simply because our first really nice ski boat was a 1995 Mastercraft prostar 190.  It was an awesome boat, had the cool corvette engine / valve covers, looked hella cool, did sweet power turns.
So, lets take a gander at the ole' inflation calculator. So, in 1996 (25 years ago) $100,000 in todays dollars would have bought you just shy of $57,000 worth of boat.
Ok, that seems kinda expensive still to our memories in terms of what we seem to remember what boats cost back then.  So, lets get Geraldo Rivera on the case and have him dig up some pricing info on new boats from 25 years ago.
Thanks Geraldo, glad to see our paychecks are being cashed and you are spending them on burritos.
Anyways, what did you come up with?
"Honestly, this burrito is so good, I am thinking about just walking down to the beach, and just like...chillin out for a little while, lets this beast digest and the hog to eat know what I mean?"
No and what?? and thats not acceptable and what???
"fine fine, check this shit out son!" 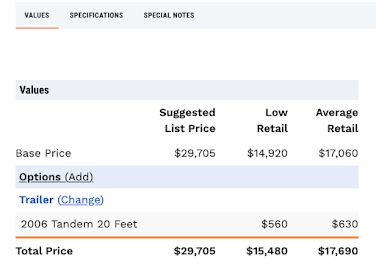 This is the MSRP data taken from NADA, where they somehow give you the original pricing of whatever you want to plug in, and we did a 1996 prostar 190 w/ a trailer, but we thought that is seemed a bit low, that doesn't seem like the right price...so we did a little more scooping and if you check out this thread from the team talk message board on mastercraft.com in general that does seem to be in the right ball park for what a new prostar 190 cost in 1996.
For example, here is a post in that thread   There is no way to embed so here is another sexy screen shot.

If you can't read it for whatever reason, it says in response to a query of original price of a 1993 prostar 190 and the person responds 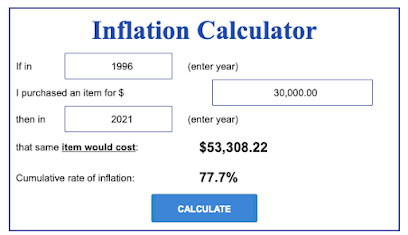 Now we are getting somewhere!!
A prostar in 1996 was about $30,000 and in today dollars would be $53 thousand and some change.  Basically.  Thats well short of the $100,000 grand for the entry level boat we were talking about before.
But, that doesn't mean a ton, its important for sure but, there are a number of things, variables as you would say that changed between now and then.
First of all, environmental standards are different.  Boats now need to comply with federal emission regulations that the older boats did not.
Second of all, technology!  We need some tunes!  and some bluetooths!  and what not.  we need those things, we didn't have them back then.
Third of all, why are we comparing a prostar 190 with a wakeboard boat?
Good question, thats not really apples to apples is it?
Lets see what a new prostar 190 is today. 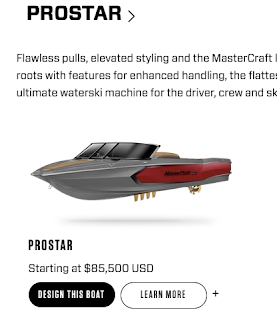 Yowza!  Starting at $85,000!!
Effectively, with I am assuming a trailer and a cover and maybe some bumps in the trunk you're stroking a check for $90,000 to $100,00 grand for a prostar 190 or the Axis wakeboard boat.
Thats alot of dimp!!
Its very difficult to do an apples to apples comparison to anything now days with boats, simply because, there are so many variations of them and the sport has really transitioned away a bit / somewhat from the traditional 3-event boat to a more wakeboard / wake surf style boat, bigger, fit more people, etc etc.
And not to bag on mastercraft by any stretch, we understand boats are expensive.  We do think there was a big shift in the industry around the time the emissions regulations came in, we remember talking to someone a number of years ago at a boat dealership or boat show or something and asking about the pricing of the boats and the basic statement was:

"Once they had to do the emissions it added about $10,000 to the cost of each boat, which, at that point your not getting into one for under 50, so, i mean, why not"

Which, by the seat of the pants feeling we had, tends to jive.  We thought that back then boats were more obtainable and we were right...but, were we, what is the median income from 1996 and 2020 (the latest we could find)

Meaning, the price of boats outpaced inflation and outpaced the median income of people in the U.S. 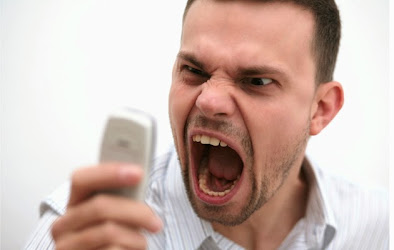 ring ring
Hello?
"I CAN'T AFFORD THAT THOUGH!"
Sheesh, us neither dude, no reason to shout.
"OK THANKS GOOD BYE"
We don't have any solution or anything like that, boats are what they are and the sport is at a different place then it was years ago.  Is that good, is that bad?
That's a conversation for another day, but, its certainly something worth thinking about.  But, to that end, cars are more expensive and houses are more expensive and basically the income that we make...the average amount for a person to make in this country has not kept up.
Which takes that, "It feels like this was more obtainable back then" feeling and turns it into a fact.
No, your purchasing power of a boat is not what it was...or your purchasing power is not that of your parents back then.   Remember how people would be able to buy a house and retire and have a pension?
LOLOLOL.  SUCKER!  not anymore! Unfortunately, that is a fact and its to bad.
By Dig Dug at January 30, 2022 No comments:
Email ThisBlogThis!Share to TwitterShare to FacebookShare to Pinterest
Labels: boat price, christ this is expensive, everything is expensive, expensive boats

Hey! Lets fire back up Vid Day Monday and go to St. Paul, MN where these ABSOLUTE PSYCHOPATHS went skiing on January first in -11 degree weather.
NO THANK YOU.
Especially enjoy the part at about 55 seconds in, where the dude is doing a deep up and totally engulfed in the smoke from the exhaust.
The sport of waterskiing, where everyone is a psycho and we all just think its ok.
By Dig Dug at January 03, 2022 No comments:
Email ThisBlogThis!Share to TwitterShare to FacebookShare to Pinterest
Labels: vid day monday
Newer Posts Older Posts Home
Subscribe to: Posts (Atom)