Damn, its too rough to ski today 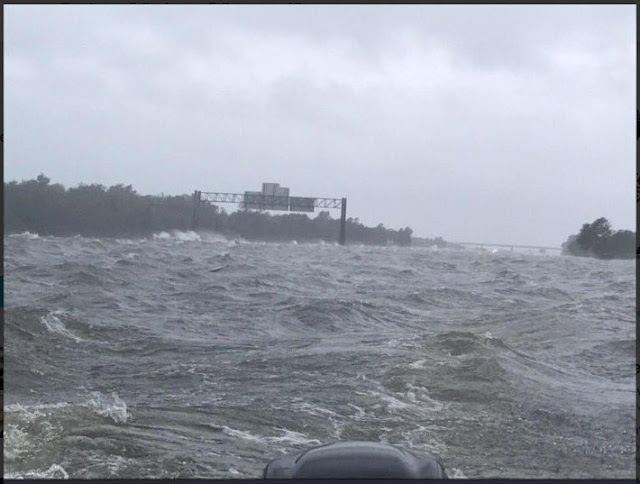 This is Interstate 10 in Houston. We joke about this but in all honesty we hope everyone stays safe in Houston, SE Texas and other areas affected by this storm. The massive amount of water that has been dumped and is still falling is mind boggling.

Posted by Old Dirty Bass Fisherman on August 30, 2017 No comments: Links to this post


Earlier this week, word started to leak out that the Malibu Open, the only real big 3-event tournament, and/or non-show ski tournament held in the mid-west, was cancelled because of an algae bloom in the little lake in downtown milwaukee that it was held.

This sucks for those of us who really like big time waterski tournaments held in more public locations. If you are one of those who prefer a private location with no public interest, then...well, the rest of this isn't for you.

But, before we get to far, lets take a quick look at the beauty that is the Malibu Open.

Event director and all around powerhouse April Coble Eller getting it done at the #MalibuOpen @cobleski #SeaDek #SeaDeked
A post shared by SeaDek Marine Products (@seadek) on Aug 28, 2015 at 9:49am PDT


Do you see that?  Thats profesional level skiing in a downtown location!  In a major city!

Why is this important??  Why should this matter to all of us???

Because the Malibu Open has been held at Veterans Park in down town Milwaukee for like 8 years, and when done right, rivals the LA Night Jam for sheer beauty of skiing set against a back drop.

"Oh, but, CRB, you should see when people ski at my uncles farm if noonegivesashit, Utah" - idiot person.

People that don't have an access point to our sport.

People that don't understand what Ryan Dodd just did is incredible.   But NO ONE WAS THERE TO SEE IT!

Now, lets be honest here, most of media consumption nowdays is not in person, its via computers or phones and what not, and that isn't something that should suprise us or make us feel weird.  Thats a big time thing for all sports.  We are never going to go in person and watch a swim meet, but, will watch online.

We will nev....just kidding, we totally will go watch beach volleyball, because under the lights, with beers in hand and hot bodies in sand...well, life isn't so bad bub.

This is what our sport has.  In spades.  Lets be real, have you seen any of the CRB staff in person on the water?  Shoot, you would be trying to get pregnant or receive impregnation if you did*

One of the biggest things we have yakked about on the CRB since its inception in 1992, was getting our sport in front of people, let people see how awesome our people are.  In whatever aspect it is, wakeboarding, cock skiing, show skiing, kneeboarding...Whatever!

Which is why, as much as we love this site, this hurts a little.

Trophy Lakes is awesome and we know people that worked, skied, lived, maybe had sex there??

Dongs do what dongs do, yo.

But, this isn't in a downtown location, in a big-ish city where people can randomly walk by and watch the best skiers we have to offer.  Its not some sort of death-nell, but, damnit, this is one of those things that really gives us hope for our sport and the future.

A hundred years ago, there was a pro tournament in Altomonte Springs, Florida.  Kinda near a Perfomance ski and surf.  We bought a hat there once.  And a pair of jumpers....broke one of them and lost the other.  You decide which*

But, that was our first experiance with big time skiing in a big time location!  Serious, we saw Carl Roberge jump like...right around 200 if we remember right, it was mind fucking blowing to see that as a little 8 year old girl* in 1996.

The important part to us, at least, is getting our sport into a public realm, which is why we liked the Malibu in Milwaukee so much.  There is no perfect site in our sport that melds public availability and design for the skiers that we are aware of.

There is always a percentage of give or take on either side, but, to us, this site seemed to be as close as you could get...at least in the US.

We have never been to the Moomba, so, maybe that is better, but, record setting ski runs on a private lake that you don't hear about until someone puts it on twitter a day latter....ehhh....that doesn't seem to have the same juice.

Big time skiing done right in front of people who may not even know what it is, is the fresh blood the oxygen mask that helps us out.  It gives people an access point into the sport, maybe they leave not even caring about anything other then, "damn, that was kinda fun and wow my herpes is acting up", but, at least the first part of the sentence was cool.

As we were driving up to the Malibu this week in the chevette, we were discussing which strain of weed is the best for keeping your anxiety at bay and helping your sex drive.

But, wait.  shit.  what?  Wish there was a delete button on the CRBomputer.

Anyways, we were talking about, ways to bring...not even the sport as much, as the personalities behind our sport to the poeple.  Something we have been talking about in that god damn chevette for 15 years.

But, we have to give them access to it, and damnit, losing this year in Milwaukee hurts and we hope that they come back next year harder and stronger then before.

Our sport needs it, lets get us out into the people, into the unknowing public and if done right, they will realize how dope our shit is, its not bit sizable like the NFL or MLB, its a event...but, we've been to events that are produced well and water skiing in any form, when done right production wise, can be a draw that we can, right now, only dream about.

I had pretty good time over the last few days! Was happy to be a part of the Malibu Open again this year! Thanks to everyone who worked so hard to organize this contest. #malibuopen @malibuboats
A post shared by Danny Amir (@danotmano) on Aug 31, 2015 at 1:29pm PDT