Recently, Mastercraft unveiled a new boat!  Specifically, an outboard boat.  An outboard ski boat as part of their NXT (huh?) line.  Not sure what that is yet, but, we are sure we will figure it out in like, 3 or 4 paragraphs.

Thats all we could think of off the top of our heads.  Outboards are awesome, especially weird uncle Jimmy's boat, the one with three wide seating that was built to fish.  Thing has like a 300 horsepower motor, why?  So he can haul MUCH ass to get to the spot over there to sit for three hours and be racist whilst not catching shit.

We venture a guess that alot of people learn to ski not behind a nice tournament type ski boat, but, the family run-about thing that is great at floating around and not starting and making your dad super mad that the assholes at the marina didn't change the sparkplugs...oh and also being on a trailer and causing funny jack knives when trying to launch.

But, there is something hypnotic about an outboard when the motor is wound up and your are, whatever, pulling a skier or outrunning the cops or just going fast.  Its a motor that moves back and forth to make the boat turn, it kinda vibrates weird and normally engines aren't shaped that way.

Look at the motor in your car, that wouldn't look right on the back of a boat, but, SON OF A GUN! Smart people shove those things into a weird looking case, slap a prop on it and BOOM, you are cruising with like, at least a 50% better chance of cutting off your hand!!!

Anyways, reactions to Mastercrafts new outboard from around the CRB Offices were pretty unanamous in their praise.

"Wonder how fast it goes" said another

"how much you think something like that costs" said someone who knew that we were about 1/2 way through this article.

NXT is supposed to be Mastercrafts "entry" type level boats, ones that people that don't have all the money in the world can afford!   That sounds awesome, because, thats most people!

Pricing is hard to come by, as in, google can't find it for us, so, lets just go to mastercrafts site and see what its sister boat, the NXT20 inboard version, is going for. 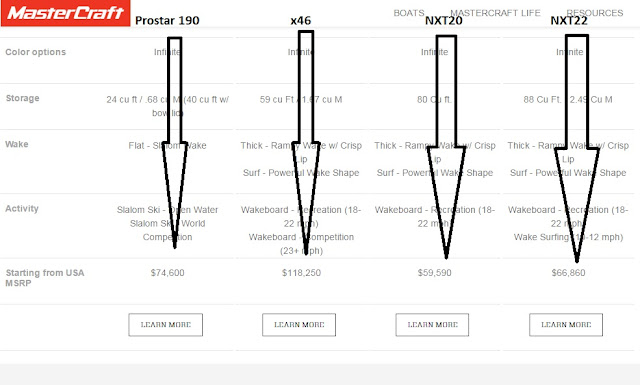 Wow, thats still a pretty good chunk of change, and WOW starting at 75 for a prostar.  That seems like alot of money.  Is it?

Now, obviously, this doesn't take into account that this new boat is an outboard and not an inboard, so, maybe that will help out?

Well, none of us ever thought that this was a cheap sport!  And new stuff is expensive, its always that way.  Doesn't do any good to get all grumpy about it!  Let the companies make their money so they can sponsor tournaments and make bitchin boats for a long time!

Moomba boats, when they came out, they were billed as the no frills entry level boat, lets see what those start for. 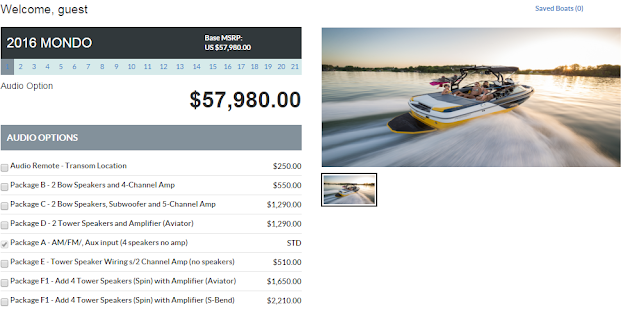 It would be really nice if there was an actual entry level ski boat out there, there has to be a way to get something that is relatively decent in the, say, $20,000 range?

Maybe the cost of making boats is just that expensive now, or emissions standards and other safety things are inflating the price, or maybe it just is what it is.

But, who knows, some entreprenueal son of a gun should just buy the old 1995 Mastercraft Prostar 190 hull molds, start cranking out those bad boys at a cheap price and, what the hell, slap Monster Energy Drink decals on the side (Co-op money baby) and let the lakes run Green with cheap boats and people going nuts on their skurfer!

What a world that would be.
By Dig Dug at January 28, 2016
Email ThisBlogThis!Share to TwitterShare to FacebookShare to Pinterest
Labels: boat booty, cheap boats, christ this is expensive, expensive boats, we are still alive