Sploid.com, this is a fantastic blog out there on the internets that, if you aren't, you should be visiting on a daily basis.  That being said, today they had a post about a super hydrophobic metal that makes water "bounce" off its surface in a really cool way.

I know...some of those words.  But, long story short, some smart ass scientists shot lasers onto some metal and made it defy physics.

Break it down sploid!


Scientists at the University of Rochester have created a metal that is so extremely hydrophobic that the water bounces on it as if it were repelled by a magic force field. Instead of using chemical coatings they used lasers to etch a nanostructure on the metal itself. It will not wear off, like current less effective methods.


The lead scientist says that 'the structures created by their laser on the metals are intrinsically part of the material surface' so they will not disappear over time, like current chemical coatings do.

So naturally, our first thought was, "yo, can you get me a diet yoohoo?  and also, what if...one of these scientists like...you know...lasered up the bottom of a ski boat??"

And we thought we were pretty smart, but, turns out, there are some other smart people out there that comment on blogs they read, and it was brought up in the comment section of the post that WE ARE REFERENCING! 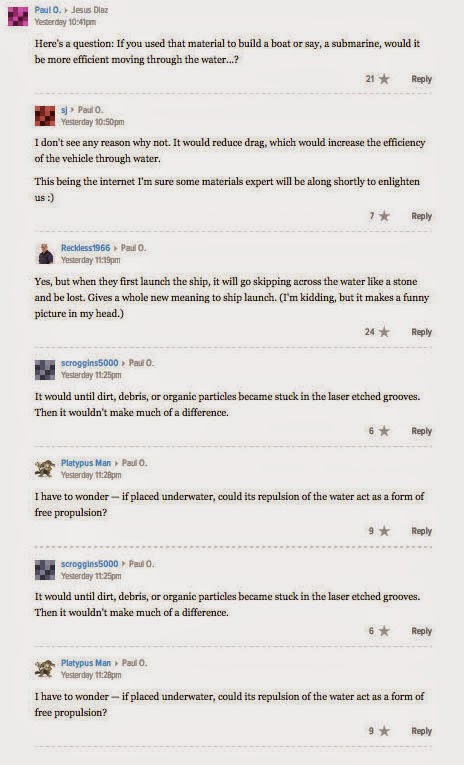 Ignore the odd double posting, but, doesn't this sort of thing make one think of a perpetual motion type device?  If water is instantly repelled away from the "hull" or the surface, one would sort of logically conclude that the boat or item would either, constantly move forward, or at least...in a sense..hover over the water.

Therefor, it would...almost, have zero friction, and be amazingly efficent.

Now, we all know that perpetual motion machines violate the first or second law of thermodynamics, thereby making them, theoretically impossible.  However, that doesn't change the initial constuct of our thought here, in that...imagine this.

and...while we do this brain exercise, we have a variety of factors to think about.

Now, with that in mind, lets think of a couple things.

Lets not delve to deep into the what-ifs here.

Lets look at this from a strickly pragmatic standpoint.

And also, without any science to back ANYTHING up that we are going to hypothesize.

A normal 21 foot ski boat, be it your boat or our the CRB's skimasterbu, has a drag coefficent of...lets say, 50 percent of total engine power output.  Ok?  for the sake of this silly argument.

Meaning, 50% of the power from the motor goes to forward momentum and 50% goes to breaking the bonds of what the water and the environmental factors and your fat ass friend who is a total creep whenever Gina wants to wake surf.

So, if laser etching the hull of a boat can produce less drag, one would assume ALL OTHER VARIABLES REMAIN CONSTANT OK, that one would see a drastic improvement in the efficiency of ones per gallon / per day / per unit of whatever, of your time in a boat either skiing, drinking, dicking around or whatever people do in their boats.

So, lets look at some numbers.

From AAA.com the average price of a gallon of premium gas is $2.466

And say, for example, you go through 10 gallons on a typical day of #LakeFrolic

Ok, thats not to bad, because you did get to peep Maria wearing her bikini, so, that doesn't seem to bad.  HOWEVER, say in an average season you ski, three times a week?  and if a "summer" is 4 months, thats....

Extrapolate that over a year (assuming you are rad and ski all the time) you are looking at...

Now we are talking about actual money!!!

Assuming again, that a laser etched boat saves you the entirety of that drag coefficent that we talked about before, what it does is gives you a 50% increase in efficiency, you would then be looking at a savings of.....

Ok, well, lets say you aren't concerened with your money situation and your suger daddy pays for everything, looking at you University of Central Florida Girls

Anyways, say your concern lies more with the environment.

Which is a wonderful thing to be concerend about, we all live here, lets take care of our shit.  However, it may be a fruitless enterprise, as maybe we don't affect things as much as we think...guess, what, we are all going to die and we strive to be awesome and in a Silvia Plath sense, its stupid that we do.

WHATEVER!  you have a desire to leave the place better then when you found it.

Lets look at that.

Via BoatCarbonFootPrint.com, one gallon of a gas is roughly equal to about 20 pounds of C02.

So, lets use our formula from above ok?  Again, using 10 gallons of gas per #LakeFrolic!

Extrapolate that over a year (assuming you are rad and ski all the time) you are looking at...

Wow, that seems like an awful lot of C02.  And this doesn't even include the gas bag you work with on a daily basis that either farts that out or spews that from his/her mouth!

So, again, assuming that 50% reduction with the laser boat, your looking at..

Thats, probably, to many pounds of C02!

Thats SO MANY pounds!!!  That has to be a good thing!

This entire exercise is totally hypothetical, but, what it can show is a couple things.

1) While we focus so much on the efficiency of engines, there are really smart poeple out there doing things that, if we think slightly outside the box, can utilize their findings in much more fun ways!

2) Waterskiing in totality, will always have an uphill climb because at its core we are not an efficient sport.  We use alot of gas, have high powered boats, make alot of noise and generally don't really conform to the ethos of our time.  Our show ski boats have upwards nowdays of 900 horsepower, our wake surf/ski boats have 1000 some pounds of weight in them to make huge wakes and are powered by enormous motors.  We are not an efficient / environmentally sport.

However, that is not an attack or in any way a Taylor Swift sideways eye at the way in which we do our business.

This is more a thought process on what can be done in the future.

Technology and the advancements in both materials and the way in which they are utilized will both make for a fascinating look from the outside in, as well as a boon for those of us who, occasionally, get out and get wet and get after it.

Confucius noted that, "Study the past if you would define the future"

The history of boating, of all technology is giant leaps forward on the backs of smart people who find new and better ways of doing things.  The history of boating is equivalent to this, boats became lighter, more powerful, more efficient, more accommodating, and more fun...

There are things out there to reshape / redefine the future of our boats that we treasure, and its fun to look at the various things that may lead to a brand new way of thinking about them.

By Dig Dug at January 21, 2015
Email ThisBlogThis!Share to TwitterShare to FacebookShare to Pinterest
Labels: CRB Long Form, just give me a gallon of gas, laser boats, science