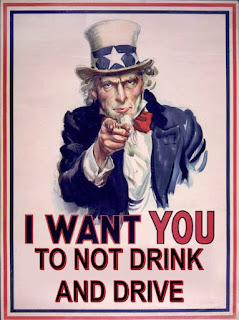 There is no ultimate moral code of drinking and then driving, its not our business what y'all do in your life, its your life to live.

Drinking and driving, however you define that, is not something in our moral world to define for anyone.  There is very few people that actually have the moral high ground to stand on that they have never had a drink to many and driven their car around....the majority of the time that someone says that, we respond with, "bullshit".

Its not right, nor is it wrong, it just is.  We, as a society, tends to embrace the idea of and yet, reject the idea when it suits us, of course.  "oh, i was drunk" is a great excuse when it suits someone, but, when its used as an excuse to you it doesn't hold its weight.

Because there is no context to the meaning.  Say, for example, you go to a bourbon tasting event, and have a few drinks with some snobby people and really hone in on the peat taste of the rye you tried.  Its delicious, but, you get pulled over and get nabbed for drunk driving.

Are you worse then the person who knocks back a few 40's and gets nabbed?

The answer isn't really that clear.  Its a weird moral ground that we all stand on, but the ground that it sits upon is properly shifting sand.  Its not a real thing.  its not stone.  We moralize our own decisions in a vacuum of our own morality.

The other night something happened that pulled that concept out of my own thinking.  We have all had experiences with our friends drunk driving or near misses with drunk drivers or friends that have been pinched for it or whatever.

Its all part of it.

So, the other night as I was driving home from work...I want to say I was almost killed...but, really, I was almost in a crash.  There probably was not death on the horizon, it was just scary.

I was driving down a urban type road with a bunch of people standing around, so I was going slow to not hit anyone...which sucks!  Like, "hey!  get out of the damn road!  Im driving here!"

Anyways, after I got through that mix of people, I was coming up to a stoplight I stop at every night, not something you think about, just a something that you do.

Its a bizarre light, there are six different streets that funnel into the intersection, and on the daily basis of driving on it, its frustrating, because the lights seem to take forever and you just want to go.

Its one of those intersections, where, you get through one light and maybe, not 100 yards away is another light that always seems to get you and you have to stop again. 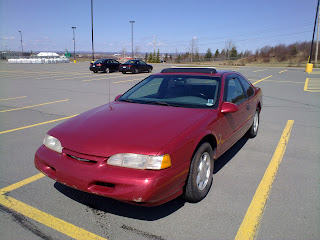 Never the less, I was about 300 yards short of the first light and around the corner comes a car, and we can all tell the difference between someone driving fast and someone driving a bit out of control.  This personal was out of fucking control.

They swung wide through two lanes of the on-coming traffic and then whipped into the the two lanes of on-going traffic...one of which I was in.  The first thought that went through my head was, "this dude is getting after it!"

But, as he/she whipped back into their lane and then back into mine, I got a little concerned that this person wasn't really with it.

They swung back into their lane, with their head lights swinging around like you would see someone with a rear wheel drive car in the snow, and then back into my lane heading at me.

So its known, I do not drive a big car, I drive a little car.  Sure, we have the truck for towing the boat, but the daily driver is a small ass car and maybe not one that you want to put up against a speeding drunk driving car at midnight.

Once I noticed what was happening I swerved to the right, not quite onto the sidewalk, but for sure out of my lane, into the lane set up for parked cars with the thought that if necessary I was going to hop the curb and probably into the tree that, most likely, was going to be there to fuck up my new car.

Luckily, the drunk driver person happened to swing back and miss my car, intentionally or not, by mere inches.

I took a deep breath, a touch shaken, and continued on...hopping this person didn't hit anyone behind me or cause any damage.  Maybe, I could have called the police, or done something more.  Hindsight maybe 20/20, but at that moment, I wanted to get home and, ironically, have a drink to calm my nerves.

I am not saying you are a bad person.

What I am saying is this, that shit scared the shit out of me and maybe I am rethinking my ambivalence towards having some drinks and hopping in my car and driving home.

I think that driving is a privilege that we are afforded in this country, we are given this privilege with a sort of loose set of guidelines to not break.  Don't be an asshole, stop at stop lights and for christ sake, don't be an asshole.

The majority of people I run into on a daily basis at least aren't assholes, but, more and more, I feel like we have become overly accepting of assholes, shitty driving and generally ass back wards cultural sensitivity.

I don't want to persecute people who have a drink or few at dinner and go home, as a number of states and/or all of the states are thinking about a .05 b.a.c, which seems like we are out to get people rather then get the bad people.

Rather, I think we have gotten to a point were the real bad people, the dregs of society no longer factor in our decision making process, we are only going after those who still play by the rules.

Its a sociological issue...we are allowing shit stains to run around whilst the decent people are being pinched.

The fucker who almost crashed into me has no concern for the the overall well being, the over all collective of our society, thats not their concern...they live in the world of everyone else takes care of it, there is no personal accountability  the rest of us live in a world where our actions have re-actions.  We fuck up we accept the consequences  we work and win, we get the reward.  But, we work to get it.

Thats how it should be, work for your own reward.  not the other way around.
By Dig Dug at June 03, 2013
Email ThisBlogThis!Share to TwitterShare to FacebookShare to Pinterest
Labels: actually serious, drunk driving