Have you ever been this happy?? 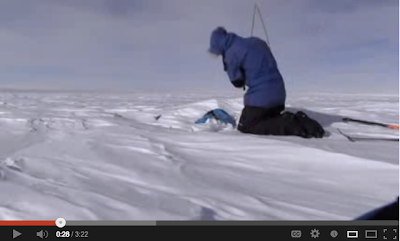 Take a look at that dude in the picture above, Aleksander Gamme, an Arctic Adventurer type, he did a three-month trek to the south pole, alone.  Along the way he would leave himself stashes of stuff, he would gradually leave his things along the way as he got tired or needed to be lighter.

That picture shows him near the end as he is exhausted and hungry, having lost 25 Kilos (I believe I heard that right, i was tipped to this from the Radio Lab show on NPR HERE)

Quick side note: he did a bunch of these little 3 minute videos along his trek, but, this one in particular is fantastic.


As he digs through the stuff he buried he is finding a bunch of junk, stuff he doesn't need..and then....

If you aren't smiling and happy for this guy, you have no soul. Even though you don't understand a word that he is saying, that right there is pure joy. Thanks Radio Lab for turning us onto this, so awesome.

Update: when you finish watching this video, listen to this song, then go out and dominate the world
By Dig Dug at March 29, 2013
Email ThisBlogThis!Share to TwitterShare to FacebookShare to Pinterest
Labels: artic adventure, awesomeness, happy, Winter