The Balance of Value 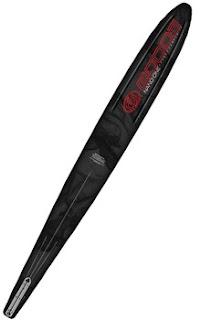 Waterskiing, in any of its various forms, is an inherently expensive sport, from the boats, to the gas, to the vests/wetsuits, to the skis, to the wall.  Its astonishingly expensive to live a life of a waterskier.

If you are a surfer, you only..really..have to purchase a wet suit and a board.  Obviously, there are mitigating factors, but, in general, that's your base equipment.  Watersports are most likely, short of waterskiing, just you, your body and a piece of equipment.  Kayak?  You and a boat.   Swimming?  you and a speedo.

But, waterskiing is expensive.  Boats, even old used boats, are expensive.  At least if they are in any shape to  be driven.  A new Prostar 197 is, what, at least 45 grand for a new one???  Something like that?  That is a big chunk of change even if you are full of money.

Recently, the B.O.S tweeted out that there is a new Goode Nano ski available, a 66 inch version of their ski.   Because lord knows that the 65.25 and the 66.75 inch ski could never satisfy your ski desires.

Lets get this straight, a new Goode Nano ski is $1940.  American money.

Yet, people buy the latest and greatest because they think that it can help them get to the 22 off or whatever.  When a 15 year old Kidder Redline is perfectly acceptable and something that probably jives with their individual talent better then a $2000 slalom ski.

There is certainly a bit of a jump from ski level to ski level, I became a much much better trick skier when I first tried out a goodman trick ski, the tricks that I  was never able to get on my old trick ski, I was able to master on the Goodman.

Why is this?  It certainly wasn't the cost of the ski, nor was it that I all of a sudden became a better skier, but, because the technology behind the ski and the 15 years of evolution from my old ski to the new ski helped me out.

But, was the ability of me to get some of my wake tricks that I couldn't master before worth the price of the new ski so I could nab a thousand more points or so in a trick pass?  How do we balance that out?

No doubt that the Goode Nano is probably a infinitely superior ski to the slalom skis that I have spent most of my life sking on. Yes, we are back talking about slalom skis after a brief sojurn into the world of my mediocre to poor trick ski skillz.

Here is where the issue arises, at what point does the incremental increase in output justify the increased input/output monetarily into equipment?

If  you look at it from a straight perspective, there are what....10...15 people in the world that can properly ski a Goode Nano??  People that their skill level matches and/or exceeds the actual ski that they are on.

But, for the rest of us, and odds are if you are reading this, you aren't that good.  This is not meant to be a dick thing to say, but, its true.  Are any of us that good that we would need to spend this kind of money?

In fairness, the better skis, the better equipment, the more expensive the stuff the cooler it looks and the cooler we look standing out on the dock waiting for our pull.

Think about it, you come wandering out onto the dock with the purple Kidder Supreme that Kim Laskoff rocked in the early 90's you are going to feel like a chump, but, you come rolling out with....I dont know..some Syndicate type ski, you are feeling pretty badass -JM2 (photo by mommer).

So, where is the balance, where is the value, how are we actually utilizing our money to properly supplant our waterski life with the equipment that we actually purchase.  Can we validate our jobs, the money we make vs. the money that we turn around and spend on thing that we buy for our ski life??

How is this balanced? 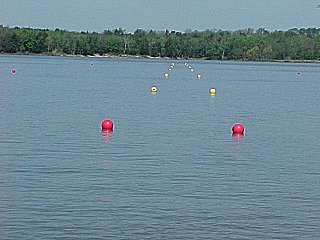 The thought is this, from my perspective, I can't ski beyond 22 off on a course, never once have I done it, nor have I felt like I have been close to being able to. Its not a matter of skill (at least in my head),but, its more a matter of ability to get on a course and ski it. I don't give that much of a shit about it to compare cock/breast size with other slalom skiers, I want to have fun and drink a beer.

Thats it.  But, it irritates me that I can't get beyond where I am at.  Would spending another $1000 get me a ski that can get me beyond that level and is it worth that outlay to get me there??

Lets take a look at this from another aspect.  Jumping.

Freddy Krueger, based on raw numbers, he is a better jumper then Sammy Duvall.   In fairness, this is not a scientific situation, I have not run anything on excel nor do I have a database with numbers, but, Sammy Duvall had a world record jump of 225 feet when he retired, with rumor of him going another 20 some feet in practice.

Freddy and Dodd and the like routinely go that distance in tournaments now days, on skis that are another 30 some inches longer. Are they benefiting from increased technology?  SURE, of course, are they  equal skiers to Sammy?

That point is debatable, but, in my head, Sammy is the single best skier we have ever seen in any genre of skiing ever.  But, then again, Freddy also makes our panties wet.

I am of the opinion that I could ski on my old Redline today, and with a bit of working out / cross fitting (i see you Marcus and Karina , and ski better then I ever have and I wouldn't need a brand new expensive ski to get there.

Then again, just as a good carpenter does not ever blame his tools, only a foolish carpenter still cuts long pieces of wood with an Amish dual cut saw, they use a damn table saw.

Everything changes as we go on, new technology, new materials and new experiances, all lead to our new and awesome ski life.  How do we balance all that, with what we want?  The latest and greatest equipment can't make up for our own inadequacy  if we don't put for the effort to become better skiers.

So the gist is,what, that we have to balance out the work we put in off the water, with the money that we can spend on the equipment we use on the water.

If we can keep that balance IN  BALANCE, then we are good.  Don't try and short change the process with just buying new stuff, while understanding that the ski companies put money into designing stuff that also helps. Just keep that balance in mind, and you won't feel guilty about dropping two grand on a new ski, as long as you put in the effort on the other side to get there.

By Dig Dug at December 18, 2012
Email ThisBlogThis!Share to TwitterShare to FacebookShare to Pinterest
Labels: CRB Long Form, Slalom, slalom is all that is holy