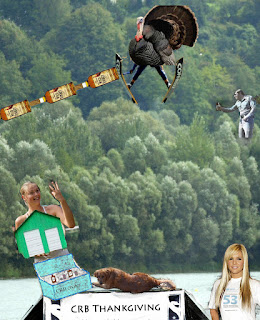 Every year that the CRB has been around we have always taken at least one day a week for a celebration, we occasionally invite over our neighbors from the industrial park compound where we operate, we invite over our friends, we don't invite over our family and sometimes we call  up the strip club and ask them to cater.

They have delicious bacon wrapped crabs.

But, as we come into the holiday season and as we are getting a  bit older and have a few more projects on our plates (bad place for projects), but, it becomes harder and harder to really sit back and reflect and actually give thanks for the things that are awesome.

So, lets run down a few things that we can think of quick off the top of our heads about the last year of waterski.

1) Night Jumps.  This year there was no LA Night Jam, which was a big disappointing around the crb offices, it was the first even like this we had ever seen and were blown away at that time. It got better over time and it was sad when it didn't happen this year.   But, we were able to see in person the Malibu Open and one thing that separates the Malibu Open from anything else we have experienced is that the venue is right in the downtown area of the city of Milwaukee.

If you have a chance to attend, by all means, do it.   It is an absolutly stunning view and the way the lake transforms from a silly duck pond during the week to hosting the worlds best skiiers is really something to behold.

But, the reasoning to be thankful for night jumps, is simply that these are a thing, they are being webcast, there was just one in Chili recently...right??  Chili?  anyways, this is a thing and it is awesome and the more we do it, the more people are going to notice it and attend and give money and that is never not a good thing.


2)  MTV.  ugh, i know.  Christ.  But!  They have a TV show with the Soven brothers.  They are wakeboarders, which means (despite what USA Waterski has you think) is actually water-skiing!

The reason to be thankful, however, is that while wakeboarding does have a bit more of a mainstream vibe to it, the fact that we have some personalities out there that are even worthy of being on a regular tv is awesome.  This will only serve to strengthen the sport as we go forward.  Further more, if you follow various people on twitter, you can see (as long as their skill keeps on progressing) there are a number of kids out there who do so much to promote the sport without even trying that have cool personalities that we wouldn't be suprised to see more shows down the road with these guys in them.

Its a real good time to be a waterskier. 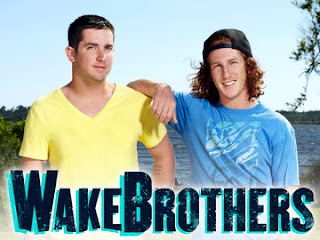 3)  Cable Parks.  No one that works for the CRB has actually been skiing at a cable park, yet.  Thats a very sad state of affairs, we suck.

However, if you think about it, the biggest barrier to entry into our sport is cost.  Boats are expensive, gear is   expensive, gas is expensive.  Its amazing.  But, with the advent and proliferation of cable parks, that barrier seems like it is coming down a bit.  They are all over the place and don't require quite the same spine of money and government involvement that a "regular" ski lake does.

Hopefully, what this does is allow for people that wouldn't normally get on the water, to strap on a wakeboard or slalom ski or whatever and get out on the water and experiance the thrill of what this sport does have to offer.

4) ODBF.  I'm Dig Dug, and am required by my contract to say thanks to fellow poster ODBF for basically taking over the site.  ODBF started the vid day monday and wakeboard wednesday and whatever the hell else goes on here.  Basically, all the pictures and videos is an excuse to not actually type out words.  Because words are hard.

The thing is, every single person out there has shit in their lives, family stuff or relationship stuff or addictions or whatever, there are things all over our lives that are troublesome, but, those things we all deal with.  All of us have problems, which is something to be thankful for. Your individual problems are mirrored by alot of other people out there in the world.  So, you aren't alone in that sense.  and that is something to be thankful for.

But, more then that, the fact that we get to lead our lives in ways that so many people would be envious of is awesome.  Not in a mean way or anything, but, take yourself out of your own body for a second and look at  yourself.

We get to go ski all the time and complain when we don't.  Thats something to be thankful for.  Thats a pretty cool life.
By Dig Dug at November 22, 2012
Email ThisBlogThis!Share to TwitterShare to FacebookShare to Pinterest
Labels: thanksgiving