Solar powered pontoons, we need one of these 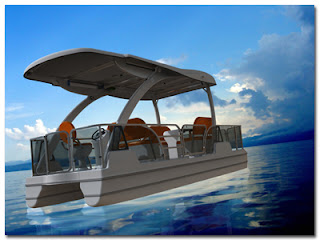 Boatingindustry.com - On Aug. 21, the Tamarack Lake Electric Boat Company opened its Rome, N.Y.-based boat building facility with one market-ready product: A solar-powered electric boat model titled the Loon. The Loon is an electrically powered 22-foot pontoon with solar panels lining the roof, which offers a “free fill-up” while the boat is at rest.

Currently, its range with a full single-celled battery is 35 miles; however, that is dependent on how much sun is available to contribute, said Montgomery Gisborne, president of the company.

“When do you go boating? You go typically when the sun is out, so why not trap that energy?” Gisborne said. Before bringing the boat to the open market, Gisborne said he and his family tested his first model on a six-day excursion in 2005, which he deemed a success. Today’s Loon is a pontoon with a twin-displacement hull.

Gisborne said many people prefer the pontoon due to its stability and easily accessible, larger deck. From a business perspective, Gisborne said he hopes to tap into the current popularity of the segment. “I believe that these are the general characteristics which attract people to pontoons, optimization for the human, not speed,” he said.

How cool is this??  We need to get one of these immediately!

Montgomery Gisborne, the dude who owns this company, is 100% correct with his assertion that pontoon boats are for driving around slowly and drinking beer.  Maybe thats not an exact quote, it was actually, "optimization for the human, not speed", but, come on, we can read between the lines.

When I am on a pontoon, i want putt around slowly, have it be quiet, drink beer, get some sun, and peep babes 24/7 you guys.

The only concern that I have with this is, with the big canopy full of solar panels, do you get sun?  How does that work?

Can you retract the panels to get full and awesome UV exposure?  or, and maybe more fun, can you climb up on the roof and get some sun up there?

Whatever, we want one.  An electric boat.  Powered by the sun.  Harmony with nature.
By Dig Dug at September 14, 2012
Email ThisBlogThis!Share to TwitterShare to FacebookShare to Pinterest
Labels: just give me a gallon of gas, pontooning, solar powered boats