Even World Record Waterski Pyramids Are Made In China

So apparently everything is now made in China, my underwear, my shirt, my sandals and probably even my pants if I was wearing any.  Now the world record waterski pyramid was made there too.  In the last month or so this record has been broken twice.  We posted about it after 3 teams here in the great US of freakn' A, Badgerland, Beaverland Must-Skis and Mad-City, set a new record of a 54 person pyramid breaking the previous record of 48 people which stood for about 6 years.

Well last week that record was broken again.  This time by the Rock Aqua Jays and some Chinese skiers. So this is what is crazy, the Chinese government actually shipped the Jays triple rig over to China to beat this and also sent like the whole team.  In the  last month we have heard about 4 different groups of skiers being sent to China to ski with Chinese teams, most of whom are overlapping.  Hey Presidential Candidates, you want the CRB vote, throw money at watersking guarantee with the pull we have it will win you the election.

So now to get down to the nitty gritty of this all.  The 54  person record is what is known as a 4-2-4-2-4-2-4 (4 tiers, 2 tiers, etc.) it was done on the first try with one boat.  Then they attempted to pull 60 people which was 5 4 highs.  They got this off the dock but weren't able to build the pyramids.  Now with the current 55 person record there is a bit of controversy, many believe the two boats were actually used to pull off the record.  (one tandem in front of the other.)  Bellow is the video, you can see the wake of the front tow boat and actually see a inboard appear of to the side randomly.

The 55 person attempt was supposed to be a 2-4-2-4-2-4-2-4-2 however one of the 2 highs fell.  I don't know how I feel about this world record.  Obviously it is one but I really like the fact that the 54 person was pulled by just one boat.  Now the two boat thing is not confirmed because I don't even think the Jays are back from China.  My guess is the Chinese will never let them leave (this comes from personal experience).  Now the argument can be had that the 54 person pyramid is staggered on the start but that is just intelligence.  Apparently they had a architect there who figure that shit out, and we all know they are good at math and geometry, all we know is a pyramid is like a circle or some shape.

So in the end 55 people is the record, but I am gonna have to give it up to Badgerland, Beaverland and Mad-City.  They used one boat and were not funded by a government to do it.  It was simply 54+ water skiers who got together on a cold windy day and broke a world record for the fun of it.  That is what makes watersking awesome, not some government basically buying a world record.  So congrats to the Peoples Republic of China and the Rock Aqua Jays on there world record, but I am willing to bet a case of Pabst and some Cheese-its that it will only stand for a bit because those Wisconsin teams aren't giving up.  For gosh sakes Wisconsin is the capital of showsking and where Pabst is made!!!  So next time you buy Chinese remember they are using that money to steal our world records.  Plain and simple.... 'MERICA!! 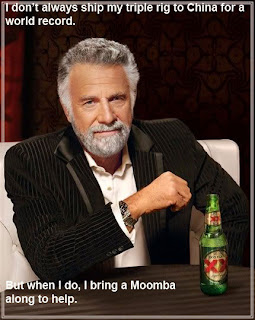