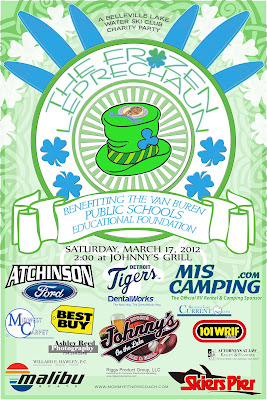 Please join the Belleville Lake Waterski Club on Saturday, March 17, 2012 at 2:00 p.m. as we open the 2012 Waterski Season at Johnny's on the Lake, located at 146 High Street, Belleville, MI 48111. Come, watch and cheer on a parade of Belleville's bravest (craziest) Water Skiers as we dodge the icebergs of Belleville Lake for one of the community's most important charities, the Van Buren Public Schools Education Foundation.
This important organization has raised and awarded more than $100,000 for grants to our public schools, and each and every dollar donated will be utilized for direct grants to benefit the schools and our local students.

Originally known as the Belleville Lake Stump Jumpers, the waterski club was organized in 1970. Since then, many club members have won State, Regional, National, and International waterski titles. This successful history can be attributed to the naturally protected waterski site that Belleville Lake offers.
Other than traditional three-event waterskiing, the waterski club hosts several events on Lake Belleville each year, including an exciting water ski show and exhibition as a part of the annual Taste of Belleville, waterski clinics, and the St. Patrcick’s Frozen Leprechaun fundraiser.
With membership open to all interested, the club promotes the enjoyment of waterskiing and wakeboarding with safety and respect for other boaters. If you like waterskiing, we like you!