Karina Nowlan is an incredible waterskiier, can we all agree on this? Yes?  Well, this last weekend at the Australian Open she won everything, in a weighted system she beat everyone, the boys, the girls, the men, the women, the aliens, the everyone, to win the zillions of dollars that you get by winning waterski tournaments!!!  It says so right on the facebooks! link

Look, she was covering up the big check in that picture, so we can only assume it was a zillion dollars.

However, her skiing prowess was not the only thing that Karina dominated this weekend.


In the above 6 minute video, that we recorded and uploaded ourselves (!),  Karina and announcer guy (sorry man, didn't catch your name) announced a couple of skiers and Karina, as it turns out is really really good on the mic.  Like, god damn good at it!

We recorded this clip late on friday night/saturday morning, about 12:30 our time, and if you listen close you can hear our dog hopping off the couch and if you listen real close being real irritated, but, we probably stayed tuned in for a few more hours...or until the rains came and they stopped the broadcast that night, because Karina and the other guy were so great to listen to.

They carried the webcast for the couple hours or so that we listened to it because they worked so well together.

To be fair, the whole webcast was awesome...all the various angles that they had were expertly directed...it felt like watching a real tv broadcast on our computers.  One of our complaints about the malibu open webcast was that all we really got for the jump event was a view from down lake.  Not a bad thing, but, the Aussie was done so well with in boat views, shore line views, dock views, we got spoiled we now expect something at least on par with how well this one was produced.

But Karina and the guy were awesome to listen to, there was no yelling at you to pay attention, there was no fake excitement, it was was simply Karina explaining, with appropriate energy, what was going on with her expert opinion and the other guy popping in to ask relevant questions that made sense to what we were watching. 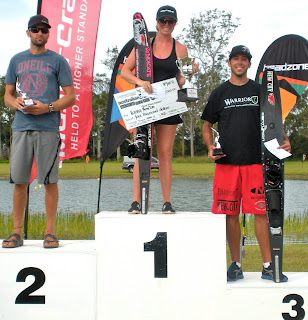 It certainly does not hurt that Karina's voice is adorable as hell, the Australian accent that she has..note like 1 second in how she says wobble.  Its so good and, honestly, it adds to the product.

For her its probably not something on her mind, but, in a few years when she is done with competitive skiing, she certainly has a seat at the webcast/tv cast table.

We really wanted to get this post up that night, friday night, but we couldn't figure out how to upload a mp3 clip into youtube, we just hit record on our computer to catch the webcast, but, as it turns out is way easier then we thought.  Just have to add a picture into the upload, which is why there is Karina and a kangaroo.  Oh, real original! :)

If I was Archie Davis, the trick skier in this clip, I would feel it an honor to have these two announce me.

Now, as we have said, the gold standard in this realm is our boys Tadd and Tony, but boys...just a note, you have a blond Australian and some dude on your tail and they are creeping hard!
By Dig Dug at February 27, 2012
Email ThisBlogThis!Share to TwitterShare to FacebookShare to Pinterest
Labels: CRB Girls, Karina, vid day monday