Ron Scarpa Will Build Your House

Ron Scarpa, barefooting legend and certified bad-ass, has decided to close up shop on his ski school to focus on building your new house! Or more accurately, a week or so ago he changed his website to say that he is closing down the ski school to focus on his construction business, but, that shouldn't stop you from having him build your new house.  I, for one, would not want to go against a bald man who would front to back your face off. 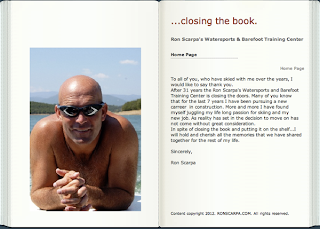 For whatever reason I remember back, maybe 15 years ago, that Scarpa was on TV in a barefoot tournament and did a flying start from this crazy tall life guard stand, came up like it was no big deal and then melted off my face with tricks that to a little kid seemed like he was some sort of super hero or god like creature.

This was before he was bald!  And as everyone knows, dudes who can rock a bald dome are 2 times more badass then those with hair.  Thats science kids, look it up.

Its amazing to think of, but, he won his first National Overall Title in 1980 at the age of 17, after competing in barefoot worlds on torn ligaments in his ankle from falling down the stairs.  Sure, your thinking, well la de da your heiness what have you done for me recently?  To that we say, he won his fourth and final title in 2000.  20 years!  20 damn years of being the awesome.

He retired from major competitive barefooting in 2005 and now in 2012 is closing the doors on the ski school.

There will always be certain skiers that we watched in our youth that will maintain some form of idol-type placement within our minds.  Guys like Sammy Duvall, Patrice Martin (crb patriarch), Kim Laskoff, Freddy Krueger and Scarpa.


There are two things we think of when we see that video.

1) "Yeah, whatever Ron, I can do a tumble-turn"
2) If only they had 20 foot high booms back then...and trampolines in the boat, he would really be good.

So, next time you have a construction project on your to-do list, betcha Scarpa could do it with just a life-vest on in a back toe-hold, while you cry to your mom about a sliver.  Pussy.