Legal Nonsense Getting In Way of Shredding

If you have been paying attention recently to this funky story that is brewing in Abbotsford, BC...thats Canada, eh? then you will most likely be interested in the goings on and are curious as to what is next.  If you have no interest in this or just heard about it.  Allow us to recap.

Thats it.  Thats the story, basically. You can read some more of the ins and outs of this case, here, but, I think this is an interesting petri dish of things and curious as to what this may grow into in the future.

But, here are a couple thoughts about this, as CRB legal is out today and imminent domain and what not are foreign concepts to a bad ass.

1)  Its somewhat of a bummer that two groups of waterski people are duking it out over a lake.  While, I am sure that some people, simpletons, will think of this as a wakeboard vs. slalom debate, its more just two competing interests are jockying over a lake that they wish to ski on.

Regardless, its a bummer because as a waterski community, as a whole, we aren't that huge.  It would be more benificial for the two groups to work together somehow and spread love, then to do battle with knives and possibly kill each other in the process.  So to speak.

2) Its also an interesting debate/thought process of how cable parks are becoming an acceptable or more common thing/entity then when they were considered weird in the past.  Maybe its the changing landscape of waterskiing (more wakeboard type, skate type vibe) or maybe its something as simple as economics.  Boats are fucking expensive, gas is fucking expensive, if you can rig up a cable system, have fun and within a year recoup your cost?  Why not? 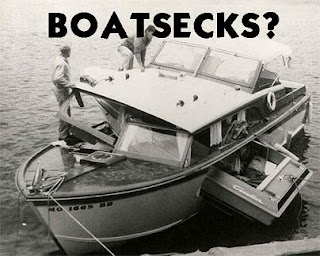 Note: its way way harder to booze cruise, float around in the sun, have carnal passions in full view of other boaters at a cable park.  The rope you are attached to cant' float freely, its way harder to get it on when you are being dragged around the water, etc.

3) Financial implications.  Touched on it above, but, if the cable park can come in and generate income for the city/township/community, by providing a service...whats the harm??  One would think in this era of taxes and struggling commonwealths, that a productive, active undertaking such as this would be good for the community.

4) Social concerns.  Do cable parks hurt/harm or help the ecology of the land, do they hurt the surrounding areas, esthetically is it pleasing to the eye?  I.e, does a cable park do more or less "harm" to the environment, be it looks, clientele or carbon foot print.  Same goes for the gas boat slalom dudes...do the boats put out to much noise, pollution?   Its the prius vs. pick up argument.  In the life of a prius, does the whole supply chain along the way produce more harm then good?

These concerns are probably trivial in this case, but, it is an interesting item to follow and see what happens.  Having never been able to ski at a cable park, it would be hard to form a proper opinion of the ski value of a cable park, but, we do love wake surfing and you haven't seen a 1/2 whirleybird to face/groin until you hang out on our boat for a day, so, needless to say, we have no dog in the fight.  But, one does tend to think the ripples from this could effect us in more ways then one.
Posted by Dig Dug on February 23, 2012
Email ThisBlogThis!Share to TwitterShare to FacebookShare to Pinterest
Labels: cable parks, Legal things, Slalom