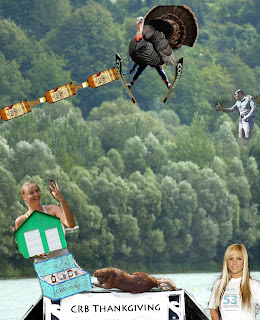 Last years Thanksgiving was pretty much a gigantic day of dry humping, we were really excited about what we had planned for the day and at every turn things seemed to go sour.

So, we have decided this year to tackle our weaknesses head on in order to avoid the problems that have plagued recent CRB thanksgivings.

First of all, last year we tried to deep fry a turkey.  This is harder then you may think, first of all, you need one of those things that sit outside with a propane burner and, well, you need to have some idea of what to do instead of just having the oil boil and throw in a turkey.

Turns out, this was very poor planning on our part and resulted in a minor to average size explosion that damaged parts of our warehouse, thereby A. voiding our insurance policy and B. destroying much of our inventory of crb merch.

So, to combat this problem, this year we went to the store and got a whole bunch of turkey lunch meat and are going to make turkey sandwiches instead.

This solution is both easier to clean up afterwards and hopefully results in less unruly fires.

Second, last year we invited everyone in our neighborhood, or more specifically, everyone else that inhabits the same business park that CRB HQ resides.  This ended in many unfortunate circumstances.  Most notably, we had no idea the amount of beer that all these people could drink, and to complicate this matter further, they became angry and irritable as the beer began to dry up.  Naturally, we keep a stash of rum in the board room, but, the unruly mob quickly sussed out this stash and made a mad dash, knocking over various party trays of cheeses and gardetto snacks.  It caused quite a mess.

But, beyond that circumstance, due to the intimate and cozy nature of the offices, we may or may not have had a few unexpected pregnancies as a result.  This is all hush hush and under the radar, but, not only did a few of our staffers in the editing bay ask for advances on their salaries to cover unexpected expenses, but, Carly and Megan who run our international marketing department both left on maternity leave in late july seemed a bit curious as our CRB contract expressly prohibits families. 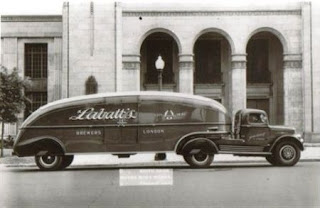 So, this year we are instituting two counter measures, first, we just went ahead and got one of those cool beer trucks with the taps on the side and parked it next to the lake so people can hang out outside and get their drank on by the dock.

Second, we have been dilluting birth control pills in all the drinking water since last years events, so, everyone should be unable to conceive...this should eliminate the unwanted pregnancies and allow people to drink to their hearts content.

Our third issue from last year, was that as hosts of this event, we were required to play nice with everyone and make sure that everyone was having a good time.  This is intolerable, as there is hella football games on tv and we had just finished breaking in the new SkiMasterBu complete with nitrous system and huge ass stereo, so, we were unable to go wakesurf and do power turns like we normally do.

This was very frustrating.

We were all, "what the hell?  Deep fried skittles?  Steak Kabobs?  we had a deep fried turkey and a cooler with cheap beer...where did this shit come from?"

Turns out, someone was holding a catering company hostage and figured the best way to make their escape was have them cater the CRB Thanksgiving party...which is odd as hell.

So, this year, we decided to hire fake hosts for the party, turns out that there are companies that do this sort of thing, Party Escorts...I guess they call em, or just escorts..either way, the ladies are really attractive and slutty...just a vibe we get.

Anywho!  This way, we don't have to play host and can ski and/or watch football to our hearts content.

In fact, this year, we won't even be at our own party.  We are just going to sit on the couch at home and watch football and eat turkey sandwiches and hang out with our regular family.

All the other stuff that we are doing and all the other things that we have done for Thanksgiving don't really mean anything, its alot more fun to fall asleep on the couch with your family then dick around with all these other crazy people.

We all deal with all this nonsense all year long, dealing with people you don't always like, listening to your boss, going to work, doing all this crap, its nice to have a day to just hang with the important people, eat turkey and watch football.  That is something to be thankful for, everyone else that is coming to the CRB party can enjoy themselves and tweet good things about us, which, is cool and all, but, this is the one day of the year that you can be with the people that really matter and that is something to be thankful for.

Happy Thanksgiving from the CRB!


s
By Dig Dug at November 24, 2011
Email ThisBlogThis!Share to TwitterShare to FacebookShare to Pinterest
Labels: thanksgiving