So the NCWSA preseason top 20 came out late last week. And we have to say we agree with none of it. This may be the worst poll in the history of all sports polls. 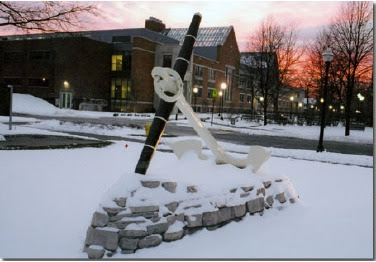 Come on, they have a big anchor on their campus, that right there gets them in the top 5. AND THEY ARE THE DAMN WRECKING CREW! I know what the voters are saying, but ULL won nationals last year...yea yea yea, that was due to all the haters getting together and disqualifying the wrecking crew so there would be some competition.

South Central has 5 teams in the top 20. That would be 5 out of...7 or 8 teams in the region, pretty good percentage. But considering most of the lakes in Texas are dry or currently on fire so they may have some issues with practicing. The Louisiana teams are as usual the dominant forces in skiing. They are also good examples of how the NCWSA is not a balanced sport in the least. Nothing against them, its awesome that the schools support the teams, would be nice to see other schools step up...but its not going to happen anytime soon, sooo it wont be a surprise when one of them win again this year.

East region has 3 teams in the top 20 and they also have the only team outside of Louisiana that has any shot at being the first team since ASU to take the championship away from LA. Alabama is bringing the strongest mens trick team the NCWSA has probably ever seen along with solid scores in the other mens events. Womens team is not a strong but still should put it up there. One event is not enough to take it all home though, so the Tide will need to step it up to get above 3rd. The word is that Rollins will be solid, we will see about that. Florida Southern will fight for 3rd at nationals with Alabama if bama slips at all.

West region is still led by ASU but it sounds like they will not be as strong as they long have been, but the rest of the region does not have a true stand out team to knock them off the top of the region. Cal Poly and Sac State could ski well and take the top seed from the west away from Arizona for the first time in many years.

The Midwest region has the most teams of any region and also has the most teams in the top 20. The Midwest has been the most competitive region in the nation for many years now. Few true standouts but always a good level of talent that makes for some very interesting tournament results. Likely Purdue, UW Madison and Ohio State will take the top 3 spots to nationals, the excitment will be the fight for D-2. Wisconsin might send two teams to nationals for the first time with the surprising strength of UW Larosse and their womens team.

But none of this matters as Hope will take it all again this year. So stop wasting your time and just admit that none of this matters when the wrecking crew is still around. Or possibly the new team forming at Palm Beach Atlantic might give them a run for their money...
Posted by Old Dirty Bass Fisherman on September 11, 2011

Email ThisBlogThis!Share to TwitterShare to FacebookShare to Pinterest
Labels: college skiing wins, hope college wrecking crew, NCWSA, striping is a good way to get through college