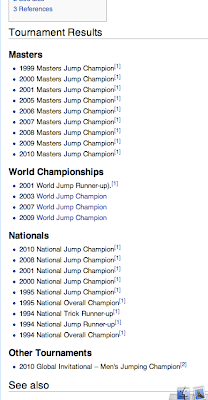 To the right is a screen cap of the Wiki page for Freddy Krueger, champion jumper, rescuer of small kittens and all around bad-ass.

Look close!  You can tell CRB is powered by mac!

Note, this is pretty much his entire wiki entry, see for yourself!, it basically says in the first paragraph, dude born in 1975, he has the world record and he is better then you are.

This is how a Wiki entry should be, no fluff, no nonsense, just in your face bad ass facts.

Not sure where his LA Night Jam action is, but, thats an impressive resume anyways.

When the CRB is done in 45 years, we want our wiki entry to say,

CreakyRowboat:
Started as Green Boathouse.
Verified best website ever.
People got pregnant just googling for it, even dudes...and mice.

How great would that be??

Freddy appears, to us anyways, as a person of few words and hella action.  This could be way way off course, but, either he is of a certain style or has maybe cultivated a certain mystique around him that lends itself to such bad-ass-ary.  Sure, having a name that is pretty much the exact same as a creepy movie guy doesn't hurt, but, really, if you were to sketch out on your etch-a-sketch the type of jump career wouldn't you want his?

Just start off blowing up all over the damn place, crashing like a maniac, reigning that in and then just going on a stretch of domination that leads waterski mag to anoint you the best jumper ever?  (not sure if there is a link for that, but, its in this months mag...also listing CRB as best waterski website ever..true story)

Anyways, Freddy seems to pick his spots to speak his mind, note LA Night Jam II (3rd paragraph from the end of that obscenely long post)

We did wonder, has Freddy ever actually spoken to Freddy?  The original nightmare guy?  We put our staff onto it, checking microfilm, microfiche and whatever else stupid things they use in movies to make it look like someone is researching.  We failed to turn anything up, so, we decided, hey! lets be un-original and pretend that they talked to each other!  Lets skype in and see.

rightsaysfred:  Hey, other Freddy, you there?

unresolvedissues: /looks in mirror
/gets hungry for pizza
yeah, i'm here other Freddy, whats up bro!  Good to see you again.  How is the fam-damily? I hears you been making a name for youself.  good for you!  good for you....mmhmm...good for you.

rightsaysfred: Hey thanks otherfred, thats nice of you to say!  I see you are ordering a pizza from dominos brand pizza store, mind if i get in on that?  I could totally go for a Hawaiian style za, hand tossed (lol) with the white sauce (double lol).  I was out today just stomping the frog-balls out of the jump ramp today and worked up a powerful hunger.

unresolvedissues: yeah dude bro, get up on this bro-ski.  Besides, they have a 2 for 5.99 deal that is bitchin as hell, know what i am saying bro-ham?  I always ask them not to cut it because...well, i have been told i give great hand-jobs!

rightsaysfred: hahaha!  thats pretty funny lamefred, i love it.  hand jobs.  haha, its funny because you would cause all kinds of injury due to your weird knife glove!

**axe69brodude has entered the chatroom*

rightsaysfred: yikes, listen bud, you are douching up the place and we allready have one pizza looking idiot here.  scram.

axe69brodude: *laughs like a idiot*
/scans for girls like a perv
whatever bro, i gotta get blazed ya hurd? where the bitchs at yo?  this shit is weak as fuck
/turns on music on ironic boombox
yeah son, you hurd dis shiz?  shit is fresh as F boy.

rightsaysfred: well, that was strange.  anyways notasimportantfred, i see you have made your, like, 80th movie recently, and you were actually replaced with rorshack from The Watchmen, whats that all about?  aboot if your canadian, which i suppose you are because you are lame as hell.

unresolvedissues: /cleans blood off knife glove
yeah man, totally, got to get that skrilla.  like ice cube say, change up that pimping.  I don't know what that means, but, someone keeps writing me checks and they keep cashing.  btw, my name is Fred.  Not douchefred, lamefred or notasimportantfred.  I know its easy to make that mistake.

unresolvedissues: /randomly invades someones dreams and kills them somehow
no, i mean, yeah, i get it.  I am not as culturally relevant as I used to be but, cheif-bro-ski-man i am just trying to make a dime in this world you know?

rightsaysfred: Yeah, nopenisFred, I understand.  didn't you get burned up by some people back in the day then you killed them all and their kids and then died or something?

unresolvedissues: yeah, that is kind of what happened leobronardo dicheifdude, but, turns out there were some grandkids or...a halloween guy or something, I don't know, I just sort of kill random people in weird ways because i am...wait.  no penis fred?  what the F-bro bro?  why you trying to get all crazy with me S.A, don't you know i'm loco?
/cranks cypress hill

rightsaysfred: hahaha.  dude, really.  I am the freddy krueger now, you are a joke.  I stomp frog-balls on a jump ramp.  I am the most dominant waterskiier this sport has ever seen or so people say and its annoying for people to google for freddy krueger and have your dumb ass come up in the images.

unresolvedissues: well, how is that my g-d problem lambroghini diabro?  there can be two freds right homey?

rightsaysfred: look man, its been awesome, i get to use the nightmare thing and your whole vibe as bit of branding for myself and all that, but, cmon, your just dragging this out.  Imagine if you came up killing random people in their bed and your name was Steve McQueen?  Think how confused people would be??


**dominospizzamanbro has joined the chatroom**

rightsaysfred: *is really g-d annoyed at this turn of events*
/bashes unresolvedissues in the head with jump ski

dominospizzamanbro: WHOA!  WHOA!  WHOA!!!  Dudes!  What is going on here??  You guys gotta stop fighting!  seriously!  have some of this delicious za, it will calm your nerves and shit, let talk this out like boyz to men!

rightsaysfred: maybe you are right pizza man, maybe you are right.  I'm just upset that this guy keeps using my name well after he has made any meaningful contribution to society and still randomly kills douche-bros and what not and makes me look like a dick!

rightsaysfred: I mean, c'mon with this crap.  Its 2011 or so, there is no reason to be invading peoples dreams and stabbing people with knife gloves and all that.  He has allready made his name as one of the best horror characters of all time, but, he is a movie character and his career arc is over.  Mine is just hitting the sweet spot, I don't need his crazy messing that up!

unresolvedissues: /moaning on floor
/nibbling on pizza
/basically dead, but, still trying to bogart all the pizza
/brodudes

dominospizzamanbro: yeah man! not cool, not cool at all.  You have to care about your dude bros, and your bro dudes, and your...whatever else you call people, winbros 8 operating system?  Geo Metbro?

unresolvedissues: /strugging to breathe
casino - casibro..lol *cough* chicagbro cubs *wheeze* for breakfast i have bronuts...thats gay but not as gay as your mom
/blood spews from mouth/random orifices
/gets on pizza

dominospizzamanbro: WOW!  I am totally smoking a joint on my way back to the shop, that was awesome!!  Do you feel better?

axe69douchebro: yo got the ganj bro? lemme hit that shit son

dominospizzamanbro: DUDE!  I thought you were dead!

rightsaysfred: Yeah man, what the hell??