Call Of Duty and Waterskiing?

This world of ours has many monsters roaming its lands, many live in plain site and look like any other face in the crowd, indistinguishable from the masses. But today we will unmask one of these monsters.
The_Krista tweeted us the other day saying that she plays Call Of Duty, we have never played COD, as she disgustingly refers to this vile game. This vid we stole from the Ball Of Spray shows that COD and its evil empire of headset wearing assasins sitting in video game chairs around the world will do anything to destroy our great sport. COD is a game all about killing water skiers, that is something we simply can not allow to continue. So the CRB is calling for a boycott of all things Krista until she and her evil water ski hating empire renounce their support for games that promote killing of slalom skiers. 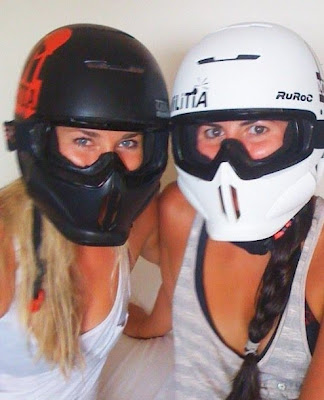 Krista and unnamed accomplice decked out in COD gear.
Well...guess it is just slalom skiers...hmmmm. Well Slalom Ski Mag might get angry but really slalom skiers have infested our sport so knocking off a few might not be to terrible.