Someone Make This Into a Real Movie Pronto!!

Via awesome music website Antiquiet comes this sweet new "video" for The Black Keys "Howling for You".

Its not even a video in the real sense, its more like the best movie ever condensed down to 3 minutes.   Trying to describe it doesn't do it justice, but, basically its...young girl sees dad die, grows up to be hot, falls in love with guy who killed dad, then kills people and Todd Bridges shows up.  Boom!

Seriously though, if Alexa Wolff showed up with a sword and the intention of stabbing me to death after a vigorous "jump set", we would probably go along with that plan.  New personal best!!!! 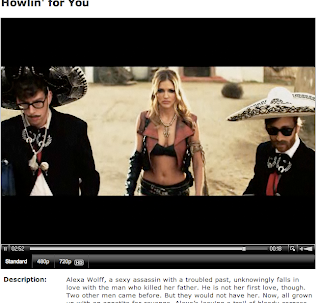 Update: its no longer embed-able.  Like your mom.  Click here to watch it.  (IMDB)
Thats how its done folks.

Besides, The Black Keys are awesome and if you don't have their music in one form or another you have failed. Because if our lord savior jesus christ has taught us anything, its that everyone should like the exact same things that we do, otherwise you are to be shunned and stoned.

At least thats how we read it. Its possible we were off a bit on some of the meanings.

By Dig Dug at February 10, 2011
Email ThisBlogThis!Share to TwitterShare to FacebookShare to Pinterest
Labels: make this movie now, Music, what you talking about