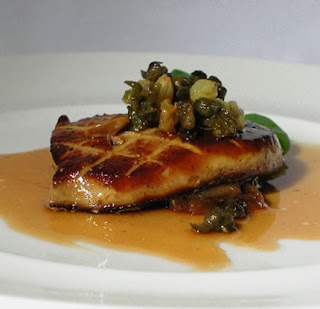 That looks delicious right?  That is Foie Gras, at least thats what turned up when we google image searched for it.

Anyways, its supposed to be some french delicacy, like, surrender and tiny automobiles.

Via Wiki, here is how its made.

Geese and ducks are omnivorous, and, like many birds, have expansive throats allowing them to store large amounts of food, either whole or pre-digested, in the crop, an enlarged portion of the esophagus, while awaiting digestion in the stomach, similar to python feeding. In the wild this dilation allows them to swallow large foodstuffs, such as a whole fish, for a later, long digestion. Wild geese may consume 300 grams of protein and another 800 grams of grasses per day. Farmed geese allowed to graze on carrots adapt to eat 100 grams of protein, but may consume up to 2500 grams of the carrots per day. A wild duck may double its weight in the autumn, storing fat throughout much of its body and especially on the liver, in preparation for winter migration.[39] Force feeding produces a liver that is six to ten times its ordinary size.[40] Storage of fat in the liver produces steatosis of the liver cells.

The geese or ducks used in foie gras production are usually kept in a building on straw for the first four weeks, then kept outside for some weeks, feeding on grasses. This phase of the preparation is designed to take advantage of the natural dilation capacity of the esophagus.[41] The birds are then brought inside for gradually longer periods while introduced to a high starch diet. The next feeding phase, which the French call gavage or finition d'engraissement, or "completion of fattening", involves forced daily ingestion of controlled amounts of feed for 12 to 15 days with ducks and for 15 to 18 days with geese. During this phase ducks are usually fed twice daily while geese are fed up to 4 times daily. In order to facilitate handling of ducks during gavage, these birds are typically housed in individual cages or small group pens during this phase.