We have said this before but will say it again "SKI RACING IS FOR THE CRAZIES". OK so we have never actually said it that way but its true. Going that fast on unpredictable water behind a souped up race boat with a bunch of other souped up race boats driven by gear heads is FREAKING AWESOME. Wait...I think I got side tracked there...I mean its crazy. CRAZY AWESOME M8!!!
Get it M8 cuz they ski racing is big in Australia...
***Crickets***

So stories like this of a 15 year old injuring their spine in a ski racing crash are not really surprising. This is a sport where killing the nerves in your arm and losing use of it happen enough that the condition, called "dead arm", is talked about when discussing the sports greats.

But then again maybe us over here in the States are just a bunch of pussies who can't handle the speed. Which is quite possible as our country is full of whiny sissies that sue when they trip and fall in a fountain because they were texting and people don't come and help them quick enough.

On the topic of ski racing there were worries that the Southern 80 ski race might be canceled because of the terrible flooding that is happening in Australia. And who could blame them for calling it off. Shits a mess and waterski sites have not been immune from the damaging waters. 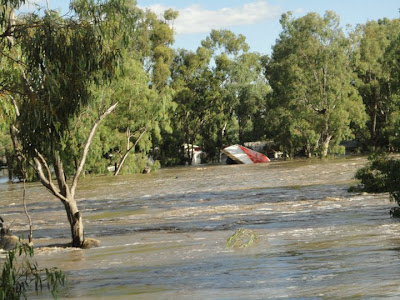 Is this the midwest a few years back?
In the US we would have been all "oh someone might stub a toe or step on a stick". To which the Aussies responded with a long stream of jibberish that when we entered it into babble fish it said "Go fast = get some". Thats tough to argue with. Or maybe it said it is to early to decide, but we prefer our interpretation.
Posted by Old Dirty Bass Fisherman on January 21, 2011