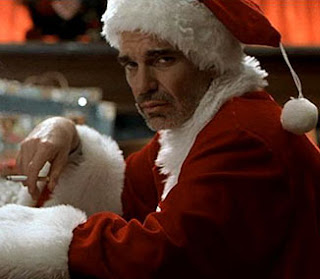 Hey!  Its December!  That means Christmas is almost here! Santa and presents and basketball and seeing your family and falling asleep on the couch!

Good times!  As we at the CRB prepare for Christmas we are probably going to have a shopping guide or a top-ten list or some other such nonsense.  Actually, don't count on any of that, we are if nothing else consistent in our inconsistency.  Like your moms gravy.

Anyways, here are a few of the things that we have talked about at the CRB compound today, including a story so god damn asinine that it will probably make you want to hug your local mall Santa.

To follow up on that Santa thing from before, read that damn article.  This dude has been doing this job for like 15 years, people all love him and people make the pilgramage to that specific location to see this guy.  Kids love him, parents love him and he takes what he is doing seriously.


Toomey - who stays in Oroville most summers and winters in San Francisco while he does the kiddie-on-the-knee gig - said he'd never had complaints before about the joke, which he saves for the occasional grown-up who visits him.

"When I ask the older people who sit on my lap if they've been good and they say, 'Yes,' I say, 'Gee, that's too bad,' " Toomey said Monday.

"Then, if they ask why Santa is so jolly, I joke that it's because I know where all the naughty boys and girls live."

That joke is so harmless that he may have well wrapped it in cotton balls.

How someone could possibly be offended by such a joke, and not just offended where you think, "well, maybe that wasn't the best place for that joke" but, offended enough to go and complain in a clear attempt to get this person fired is unconscionable.

If these peoples sensibilities were that fragile, they shouldn't wander through a Macy's anyways, there are bra's hanging on racks and pictures of models wearing varieties of undergarments that the majority of everyone in the world in their right mind understands.

Grown ups tell jokes, many of us tell incredibly obscene jokes, we do know the time and place for such things, but, such a simple joke is not a fireable offense.

Its just astonishing the knee jerk over-reaction by the parents, who were sitting on santa's lap btw (what are you six years old?), but that of Macy's as well, to totally disreagard the good will built up over 15 years, all the happy kids and happy parents and happy everyone, is stunning.

Hopefully this situation gets rectified and Macy's hires this dude back and makes a public apoligy that they over-reacted to a couple of dip-shits who I find it suprising even had kids as I am sure are probably offended by even the idea of putting his thingy going into her who-ha.  Oral probably scares them to death.  Must have been a great honeymoon.
By Dig Dug at December 07, 2010
Email ThisBlogThis!Share to TwitterShare to FacebookShare to Pinterest
Labels: Lake Trout, pansys, santa