The big news in waterski land right now is the upcoming NCWSA nationals being held in Texas at the kick ass AquaPlex. If you are anywhere in the area (by area we mean on the planet) you should head over and check it out. The CRB might even be represented there, if you really want to know who we are look for the guy that is drunk and past out at a bar and never make it to the site.

Female students from the University of Moscow put together a calender of crazy hot pics of themselves and gave it to Russian Prime Minister Vladimir Putin for his 58th birthday. I think they are trying to do what many Russian dissidents have been unable to do, kill him...with a heart attack caused by all the hotness. 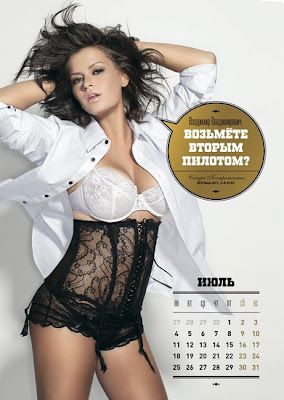 The famous Bridge to Bridge ski race in Australia was canceled due to rain. They were afraid the rain would make it to dangerous...not that skiing at 120 mph behind a race boat is not unsafe.

In further proof that personal watercraft (PWC) are bad ideas we have this women who says her husband was murdered by Mexican drug running pirates on Falcon Lake along the boarder of Mexico and Texas.
And the Texas dept of public safety issued a warning showing all of the stuff that has happened in the lake. Not good at all.

Recent college graduate Emily White was taking one last wakeboard run before heading to Easter Island to teach, and sadly she was killed after taking a nasty fall. Her dad says "wear helmets please".

Pam LeBlanc is a writer for the Austin TX news paper and loves skiing, so we love her. But she took her last set of the year last week...YOU GD SISSY!!! Its Texas for gods sake, what its like 70 degrees out...well it was 40 degrees colder then that here recently, so stop whining and enjoy that you can ski and get your ass on the water!

Not only have 2 wake parks opened in the Philippians this year but now they are part of the national Olympic committee. Hellz yea Filipinos, keep up the good work.

Some toolbox DJ says that breaking his femur while waterskiing on some ghay reality show helped him deal with his son going to prison for murdering a gang member. Ummm, not really sure what to say here, but all 3 of those things suck.
Broken femur = sucks
reality show = sucks
son in prison = sucks
but....
One less gang member fucking up our streets = woot*
*not advocating murder

And a completely inappropriate song: