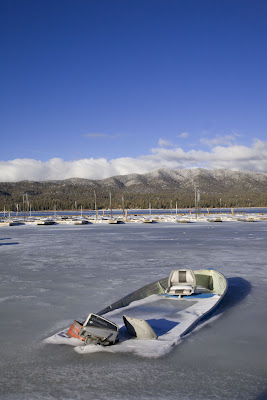 Nothing.  Why the hell am I stuck out here in the middle of this damn lake all by myself?  What happened anyways.

If I remember right, it was just a few months ago I was happily motoring around with some fat dude and his kid on a fishing outing.

They loaded my so full of damn bait and snacks and what not I thought I would burst.

It wasn't long ago I was just an unassuming boat that was towed behind one of those nice sailboats, but, then Greg had to get all uppity and put a motor on me.

Then I was used for years to buzz around the lake, I have had any number of gross fish guts and crap all up inside me and I never once complained.

I just did my job like i was asked.

I am a restless soul, I would have to be tied to the dock or else I would float out into the lake and explore on my own.  But, I understood what was at stake.

Funny story actually, a couple years ago...I think it was around 04 or so, Mr. and Mrs weren't really getting along so well, and, well...lets just say that the MR. used me to "entertain" his scantily glad friends.  He would go out at night to cock-a-tease and inevitably he would bring back some floozy to the house.

Naturally, on the nice evenings he would bring her out and would use me as a sort of floating, aluminum spanish fly situation.

God, there would be freaking glitter and baby powder and stripper smell all over.

Never the less, I didn't complain, just went about my business ferrying people all over, sometimes I would be bashed into things when people weren't paying attention, but, I was build strong and with my buddy Evinrude on the back we were a pretty good team.

Times sure seemed to have changed though, as time went on i would get less and less use, as they have seemed to move on to other interests.  They got themselves one of this shiny new bass type boats, the ones with the big motors and built in live wells and what not.

It was a pretty nice looking boat actually, but, that boat was a spoiled brat and never truly respected and treated the family like it should.  It was really prissy, a scratch here in the gel goat or a spill there and it would get all indignant, not knowing its place on the lake.

Seriously bass boat, you are just a slightly nicer version of me.  Why you act that way??

It was tough to keep up appearances, there would be months where I would just sit there at the dock, tied up and waiting patiently to go out and cruise around like we used to.  I tried not to get discouraged, but, as time went by and I just sat there bobbing up and down, getting rained on, occasionally bailed out when I got to full, I waited.

Some of the shine started to come off me, I was older now.  My seats weren't as nice looking as they used to be, a bit more droop in there, some cracks, but that was to be expected.  I wasn't kept up the same way as I used to be.

I have to admit I did get discouraged and sometimes pretty angry over petty things.  For example, this one time all of a sudden I was needed to go down the shoreline and help with transporting pieces of a tree that fell in the water.

Some of the people who owned houses in the area got together to chainsaw up the tree and it was my job to hold all the pieces so they could be brought back over to the dock and hauled away.

Well, I wanted no part of that, so, we (evinrude and myself) that we were not about to help and we didn't start and I kicked out my drain plug.  HAHA.  there was water and stuff all over their pieces of wood.  They were soaked and heavy and they were all cursing up a storm.

Thats what you get for neglecting me!

Or at least so I thought, they were so mad they didn't even tie back up to the dock, just dragged me ashore and left me there on my side like a beached whale...my ass all hanging out for everyone to see.

It was embarrassing....and I was like that...just hanging in the breeze for a couple years!

But I knew they loved me, and eventually would see the mistake in their ways and come back to me.

I would see them out and about with the bass boat, and sometimes the pontoon boat, but, I knew that they wouldn't treat them right and they would think to themselves that they needed me back...and I would be here for them.  Thats my job!

Sure enough, one day I was being dragged back into the water and loaded up with fishing gear and a cooler full of cheeze-its, sliced meats and coors light.  Woo Hoo!  A fishing trip, I thought, I knew it!!

It was just like olden times, out in the water with the sun gleaning down on us, getting all warm and happy.  It was perfect!  We spend all day together hanging out, floating around, the breeze would carry us to and fro.

At the end of the day I was even tied back up to the dock like a real boat should be.  I felt pretty good, almost smug even looking at the other boats.  See I told you!  I thought to myself as I reveled in my new found confidence.

The next day came by and they walked down the dock towards me, I puffed out my chest expecting a to be loaded up again and heading out on the water, but, they walked right by me without even a sideways glance, an acknowledgement of our time together.

I was crushed.  I thought that time meant something!

It went like this for awhile...and as the season began to turn cold, I at least expected to be pulled up on shore or flipped over on the dock so I could make it through the winter.

My rope that tied me to the dock was fraying anyways, I figured, the hell with them, I will get out of here and show them.  So, I buoyed around in the wind and waves and eventually I got free.

I was gone, out of here, I was going to find someone or some family that could use someone like me.

Off I went in search, and I almost made it.  I struggled with the waves and the wind and the cold, eventually, I began to lose the will the make it to the other side, to my friends, to the life I knew I deserved and as the cold ice took hold I just gave up.

Frozen here in the ice, all those years wasted, but, not forgotten and not in vain.  As I am an aluminum fishing boat with an evinrude.  Spring will come, the ice will melt and I will be free again.  A new life begins.