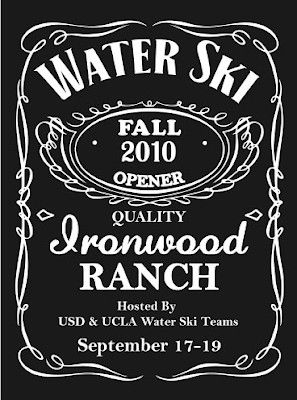 So Collegiate Waterski Season is underway, which can mean only one thing. Well other than the fact that all collegiate tournament organizers are on the look out for ODBF at tournaments. After that incident involving him and the goat....oh wait that was last weekend. I still think hes banned for some type of nonsense, I believe he must remain 200 yds away from all collegiate tournaments and school zones.
But what this really means is mass consumption of alcohol and watersking all in the span of two days! Whos pumped?!? This Guy! Last weekend saw some awesome scores from across the nation. At a quick glance there seems to be some young talent out there that is ready to make a name for them selves and some of the veterans still putting up big scores (redundant? I hope so).
I tried looking through the scores and there seems to be lots of numbers and conversion from meters to feet. So instead I drank beer to get into the frame of mind
that seems to work best at collegiate tournaments..... 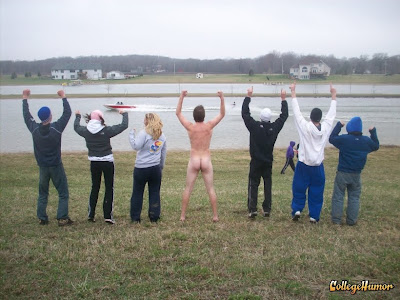 Now thats what I am talking about, where else do you see quality like that other than collegiate ski tournaments....wait why is the dude naked, hey ladies!!!!
Last weekend there were several collegiate tournaments, most in the midwest, because for some crazy reason there are more ski teams in thepart of the country where the ski season is the shortest than pretty much the rest of the country combined. Really though, last weekend doesn't count, everyone is too drunk from the first week of college to be anywhere other the the campus health clinic (they do say herpagansyphalaids was started at a collegiate tournament). So we will start to see some bigger scores this weekend leading into most of the conference tournaments. Then hopefully one of the devoted* employees here at the CRB will look at the scores and tell you some stuff about it.
*drunk fat old men who do nothing productive....ever
Really the most important thing about collegiate tournaments is building the sport up, alot of people get into watersking at the college level. Like this lovely young lady... 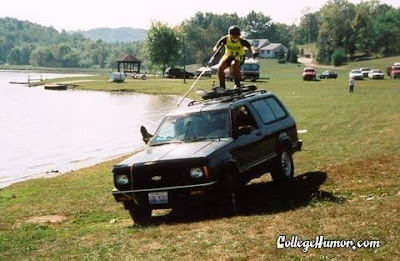 The next important thing is making memories that you wish you could forget. Like those things you say when your married, "It was just a one time thing in collegiate watersking." Well thats what we here at the CRB want to see. We are too fat and lame (and in ODBFs case just not allowed) to be at collegiate tournaments. So we as well as our old ass (but distinguished and very cool) readers want to live vicariously through you college kids. So send us your pictures and videos from the tournaments. Not the ones of records being broken....the dumb shit ones, cuz really thats what we flourish on.
So "wake up, introduce yourself to the person next to you" and take a picture, then send it to creakyrowboat@gmail.com! We will have a contest towards the end of the year for the best pictures and videos....sound good? Well good, now go do it! Have fun this weekend and make mistakes your grandkids will regret!
Oh and both of those pictures are on collegehumor.com how sweet is that?
By CRB Minion Reincarnated at September 17, 2010
Email ThisBlogThis!Share to TwitterShare to FacebookShare to Pinterest
Labels: 3-event, Beer, Collegiate, Contests, Getting Drunk, pictures