So the CRB had reporters all over the place* at the Malibu Open this weekend and there was one concensus: "beer is good". Oh and I guess they all thought the Malibu Open was a great event. A couple of our less lucky reporters sat at home and watched a blank computer screen due to the fact that webcast TV does not understand the concept of testing things prior to an event. But the angry Brit and the fat guy are a different story...because...the ODBF was there and thats all that matters.

*next to the beer carts 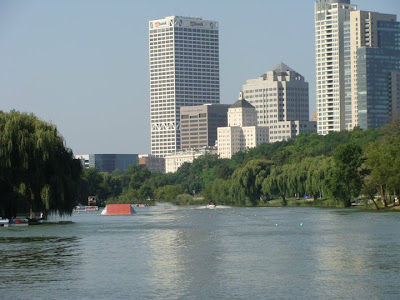 But all in all this was one of the coolest events we have seen. Right in the middle of a big city, people all over the place, very big crowds, amazing scores and the ODBF got drunk and hooked up...so it was awesome. The minion was seen getting hustled away by the cops while screaming about conspirecies to put only a Malibu skier at the top of the podium, so that just made the weekend even better.

A couple new names up top in events and the return of freestyle jump had us all on fire. April Coble-Eller won her first every pro tour stop. I know you may all be calling bullshit on this but its true, she told me in the bar that she has never won a womens slalom pro tour stop, she won overall back in the day but never a slalom title. And Ryan Dodd knocked Freddy off his thrown, infact freddy did not even make the podium at all. That does not happen often, but when it does Ryan has shown he is there to pic up the slack.