A Brit named Katie set a new under 10 record in the UK. /ODBF types something funny here*
*not funny at all 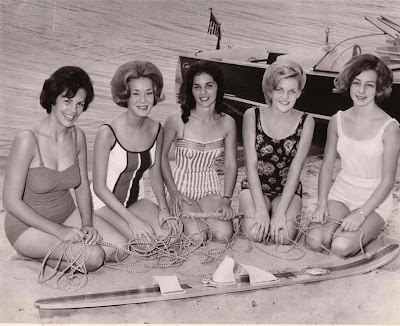 I like hair spray
Ask Vince is some blog in Memphis and today Vince talks about an old and formerly popular ski and party lake outside of Memphis. And then talks about pageant girls in swimsuits from the late 60s. Good times...

Wakeboarders from Nevada seem to be a recurring theme on the Lake Trout recently. So here is another story. We cant be inconsistent here...that would not be our style*
*completely our style 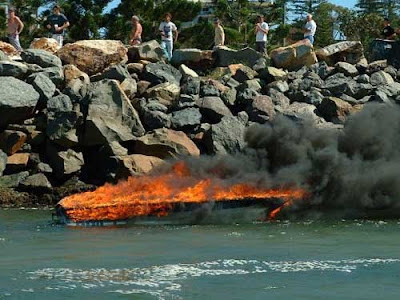 Lets go skiing...oh...nevermind
We have pointed out in the past that ski racing is only for crazy people. but apparently it is also for people that cant get enough of big ass boats with flames on the side. That group would include us /donzi'd

Are we ghay? No...at least we don't think so... But Julio Iglesias is in the news again and the fact that hes going to get naked and ski gets more press then our entire sport has for the past 10 years combined. That is really depressing.

Lake Tahoe has a museum all about the maritime history of the lake including lots of info about waterskiing and wakeboarding. How can there be a museum about wakeboarding? Its been around for about 17 days or so. And whats in it, a bunch of pictures of guys with stupid hair and tons of girls around? Wait.../cuts hair in faux hawk /switches to wakeboarding

Ok now this is just awesome. For years we have discussed here at the CRB how bad ass it would be to have a resturant on a pontoon cruising around the lake so we could grab a bite while on a booze cruise and now these guys have done it. Pizza on the water? HELLZ YEAZ BOYZ!! And the waitresses wear bikinis? Not really sure how this place meets the health codes but who cares! Only way this could be better is if it were a Taco Bell, in which case health code would not matter as none of those places are in compliance anyways.
This song rules! If you don't like it then you can go die in a fire.
By Old Dirty Bass Fisherman at July 21, 2010
Email ThisBlogThis!Share to TwitterShare to FacebookShare to Pinterest
Labels: beer is for skiing, floating resturant, Lake Trout, link dump, Music, suprise musical snobbery, Wakeboard