Some Future We Have Coming Up, We Think


While paging through the most recent issue of Waterski Magazine....

wait, lets try that again. While paging through what we thought was the latest issue of waterski magazine, we noticed something odd. We did a quick check with the assembled employees of the CRB HQ (see, we always occupy conference room D to read the new issue) to see what month we were actually in.

Quick aside, people on the CRB staff have been noted to lose entire months to waterski related benders, i.e, skiing every day and forgetting about work, falling asleep on the back of the CRB towboat (a Ski Nasterbu) or following the Jonas Brothers all around the country.

So, it wasn't without precedent that we were wondering, this is still July right??

See, on the spine (thats publishing talk for the spine) of the magazine it says September 2010.

No it isn't! Its still July! How is this possible!!

Ironically enough, it also says on the cover in big letters, "SKI BETTER NOW!". This makes no sense, ski better now, like, July 27th? or ski better now as in September, because, we want to ski well this instant, not in a month or so.

So, we just assumed that this is like in Back to the Future where Bif gets the sports almanac from the future and goes and gambles like a certified bad-ass and the world goes to shit.

So, we just are assuming that Waterski Magazine has a magical orb, possibly made out of crystal, that they rub and can see into the future. Its really something that could be put to better use then the waterski world, but, thats for another time. Lets see what is going to happen in the future.

1) Judging by the front cover, Will Asher has developed Pipes!!

2) People have ditched their boats and now ski behind airplanes. I could really use a wish right now. /shoots self

4) Mastercraft gets wise and posts a picture of Alex Laurentano on the back cover of the magazine.  We studied this picture closely, and that does appear to be the back of our CRB towboat, the Ski Nasterbu, so, we guess, it stands to reason that we are now married, or at least engaged...and bought a yellow boat...and live where there is no horizon... 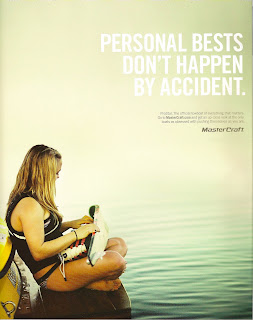 psss, that goes on your feet.
Its science really.  We are no one to argue with Waterski Magazines ability to peer into the near future.

So, really, we should be saying thanks.
By Dig Dug at July 27, 2010
Email ThisBlogThis!Share to TwitterShare to FacebookShare to Pinterest
Labels: 1.21 giga watts, CRB Girls, crb towboat, future, the crb twilight zone, waterski magazine