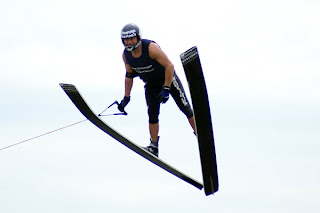 We have all seen major pro athletes when they retire, they don't really have any discernible skill set that applies in the real world, other then maybe a job that they get because of who they are, or having their name attached to a business while other people run it.

Many of these people have spent their whole lives focusing on JUST basketball or just football or something and don't have a built up skill-set to navigate the business world successfully.

Now, you rarely feel sorry for these people, as they have banked a ton of money and can live comfortable for the rest of their days, just being rich and famous and cool.  Think of someone like, Hulk Hogan, he has effortlessly moved into the world of reality entertainment with a stable family life, good kids and with total integrity.

We put our CRB investigative team on a mission recently to find some of the skiers that are at the top of their game, but, may be contemplating taking a break from the fast paced, jet setter, champagne and cheese-its lifestyle that pro-skiers have become accustomed to.

We read somewhere awhile back that Jaret Llewellyn was either contemplating retirement or maybe it was just something briefly covered in an article, either way, it behooves him to at least think of a life after wrecking jumps for money...and that was all our team really needed to investigate.

So, what does the future have in-store for one of the best jump stompers in memory??  Well, as luck would have it, his skill set from skiing will make his transition into the private sector smooth.

In fact, it appears he is already hard at work with his new endeavor, Llewellyn Demolition! 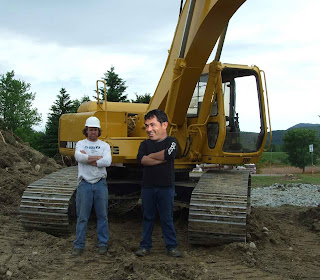 In fact, he has taken his jump ability and really gotten into the demolition of a building in Omaha, Nebraska. 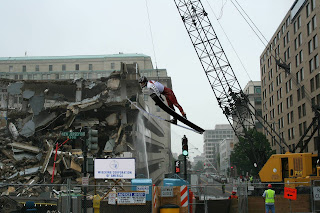 Yep, that is Jaret, attaching himself to the wrecking ball crane and destroying the building on his own!  Always wear your helmets children, you never know when a piece of steel beam or concrete may be in your way when you are self-demolishing a building!

One of the things that we have also unearthed is that Llewellyn Demo does more then just knock down buildings, they can do more precise demo, as evidence here from a de-construction of a bridge just outside of Charlston, SC. 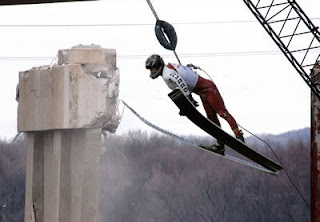 We all hope that Jaret skis at the elite level he has established for years to come, but, it is good to know that once its time to hang up the speed suit and put away the jumpers that he will be well positioned to move into a life of even greater prosperity!
By Dig Dug at May 07, 2010
Email ThisBlogThis!Share to TwitterShare to FacebookShare to Pinterest
Labels: bringing the stupid, cheez-its, demolition man, fake stuff, Jaret rules, Jump