The Role of Media: Part One of a Series - Moomba Reflections and Ruminations: 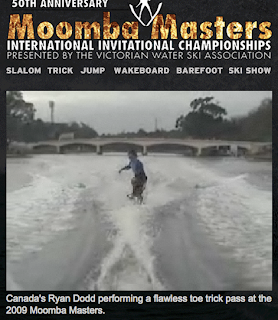 In the CRB offices we have been planning a multi-part series of posts* (redundant?) on the way in which both traditional media, "new" media (blogs) and new new media (twitter) effect us, interact with us and shape us.

In a general sports term, the downfall of traditional outlets, newspapers and magazines, and the rise in online journalism and TMZ'ishness of the sporting world makes for a very strange dicotomy of how to survive, how to advance and how to actually report what is going on.

From our perspective, on that level, its simple. Traditional news outlets and journalists sacrificed all their integrity by succumbing to the trappings of their positions and reveling in excess that came with succesful leagues. More on that later.

Within the waterski world, its WAY different.

There is no, nor has there ever been a need for real journalism. A central ethos on journalism is to suss out, seek and expose interesting stories, corruption, people in power, and hold them to the standards that are set up by the social norms.

In the waterski world, do we need that?

(ed note:  to clarify that point, there are all those things and probably a need to do so, but, given the relative economic size of the sport, do we need that sort of duality?)

Not really, we are more of a participatory endeavor. We are all in the same boat, so to speak, i.e, the success of waterskiing as a whole helps everyone, from companies, to magazines, to blogs, to the skiers, to the health of the sport, etc,etc.

We all work together to make something good.

Does what USA Waterski does actually help? Not sure.

Does Watarski Magazine help out? Not sure.

Does the CRB do anything worthwhile? Not sure.

Does anything that we do help? Maybe. Maybe not.

HOWEVER, what does help, is NOT having access to all the outlets that more mainstream sports do. Everyone tries to do the best that they do to get the word out about their particular event, sport, etc.

This is why we are slightly different then other main sports, our sport actually is better to access and thrives by utilizing the new tecnology. Blogs have helped, message boards have helped (skifly, showskiers, collegiate versions).

Twitter has been a boon for people interacting with each other and ways of learning about skiers. For example, the CRB follows a whole bunch of people, but, one of our favorite tweeters, Lauren Morgan, who we would never have heard of or cared about until twitter, just missed the cut-off in the Moomba Masters in the semi-finals and we all at the CRB were sort of bummed.

It was sort of like, "Thats Poochieski!!!". What are the odds that two years ago, faced with teh same situation, we would have actually known, nor cared, about that??  But we did!  It was great.

Further along that idea is the lords work that moombamasters did tweeting the event.  Like, if you were on the twittersphere last night, there were alot of us actually "watching" the event via twitter.

How amazing is that?  We were anxiosly awaiting every tweet to get an idea of what was happening.  It was amazing. 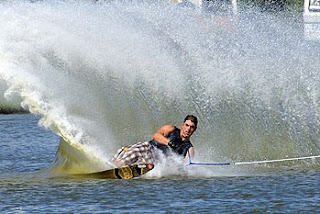 When Chris Parrish fell in the run-off against Aaron Larkin, we were shocked.  This is the time line, from newest working back:

For non-slalom folk, they each have to start with last pass they completed - 12m. Place your bets, I'm on Parrish. Sorry Kiwis. 9:47 PM Mar 7th via TweetDeck

When that last Tweet came through we actually were so on the edge of our seats we all sort of yelled and looked at each other in shock and all that.

What a fun and crazy world it is that something as simple and seemingly silly as twitter can actually really bring the event to you, in 140 characters.

Whoever the person was behind the computer for the Moomba Masters was, Sir or Maam?  We would love to buy you a drink or two.  However you did whatever it was you did to really bring that tournament to all of us over here in the states, or wherever you are, the happenings at your tournament is amazing.

Thats really the only word we can think of.  Amazing.

Our world of skiing really isn't that huge, but, its spread out wide with mega-talent and news everywhere.  Its such a rich and interesting culture that we all endeavor ourselves to do, and twitter, the silly 140 character device, brought us all together.  The warm glow of computer monitor and we were all sort of there.

While some people say that technology drives a wedge into human interaction, and will be the downfall of traditional news and sports media, the reverse seems to maybe be true in our world.  An already spread out and divided world is brought closer via the same things that other people bemoan as troublesome.

*this post was supposed to be a joking look at the top three in each division of Moomba, but, it turned into the actual part one of this series.  Similar to the 'Just give me a gallon of gas' series that has no end.  Enjoy.
By Dig Dug at March 08, 2010
Email ThisBlogThis!Share to TwitterShare to FacebookShare to Pinterest
Labels: beer is for skiing, Moomba, Twitter