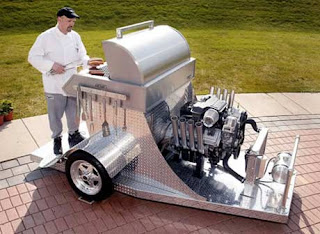 Throughout the day the operations of CRB are many and complex. Take for instance, today, Tuesday February 16th, 2010. Our complicated morning ritual of making coffee, locating a pair of pants and turning on a computer, and orchestrating the world of waterski via blog was rudely interrupted with a powerful hunger for BBQ.

Now, lucky for us, their is a great BBQ joint located just down the street from CRB HQ, the owner of the place, Tony Yipperstein, makes a mean shredded pork sammy, with a side of criss cut fries and a couple cocktails and well, lunch is served.

On our way back, heading down the street we were passed by a big white pick-up towing what appeared to be a big ski boat. Naturally, we all got excited and wanted to know what sort of splendor was in store for us.

No matter how much time you spend in, on our around the water, anytime you see a ski boat, anywhere, you always get a little more excited. That boat is someone's story, they ski and play and drink and hook up and whatever else in that boat.

Its awesome, its someone who shares a similar lineage with you, its a rare breed that purchases a ski boat and you feel a certain kinship with this person.

So, all of us piled in the CRB contact Chevette were happily looking forward to seeing what kind of boat and who this person may be who is obviously both a fellow waterski bum and avid CRB reader.

We all peered out the windows to see what was about to go by: 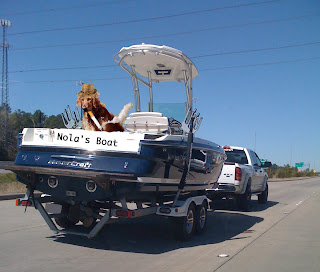 A real picture that we took, then photoshopped...we are real journalists now!!!
What on earth is that thing?  It has all the hallmarks of a waterski boat.

5) It says Mastercraft on the side

But, what gives??  Thats not a ski boat, its like a Prostar 190 and a Fan boat got drunk one night after seeing a Eddie Money cover band at a bowling alley, got naked in the back of a Buick LeSabre and nine months later this thing was born.

You can't say that you don't have a little Eddie Money in your head now, "Take me home tonight!  I don't want to let you go till we see the light!!"  Great bar closing song, btw.

Its officially a Mastercraft CSX220, and from their website they state.


Embrace every possibility of life on the water in the versatile CSX 220. This high-performance center-console boat maximizes every opportunity for you and 11 friends or family members. From cruising, wakeboarding, skiing to fishing – this athletic and adventurous machine is the "can do" boat. The Cross Sport Xtreme's open SuperFly bow features a double helm seat with bolster and acts like a lounge allowing you to stretch out. The bow also provides a forward anchor locker with a boarding ladder for easy access.

We aren't trying to be douchy or anything here about this boat, we are sure that Mastercraft did research or whatever and figured out that this boat would put what all companies shoot for, Dolla Dolla Bills Y'all in the bank.

But, something seems amiss, it seems to strike a uncomfortable chord with us, it doesn't seem to strive to be a great ski boat which is what we associate Mastercraft with. 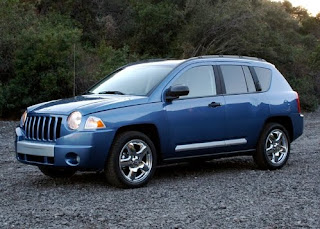 inner monologue: "wow am I a bad idea"
To make a comparison it reminds us of a Jeep Compass.  Sure, it says Jeep on it, but, its not really a Jeep.  A real Jeep is something like a Wrangler or a Cherokee, something that drives like shit on real roads but mops the floor of your Acura P.O.S SUV when its time to bash over some rocks or through mud or snow or whatever.

The central ethos of Jeep was a sort of can-do, off-road attitude that manifested itself in their corporate culture, making tough, off-road vehicles that also had a manner of on-road pleasantness that spoke to their brand identity.

Thats the thing with this Mastercraft.  Sure its still a Mastercraft, but, to us, its not a REAL Mastercraft, its a bastardization of the brand that should be left to crap boats like Bayliner or 4-Winns or some shit.

Actually, a better idea would be, sure, you can make this boat, but, don't brand it as a Mastercraft, define a new brand identity for your so-called cross-over boats.

It takes years and alot of work to build a reputation and equity into a name and, as evidence by Jeep, a blink of an eye to destroy it.  Hopefully we are wrong, but, a "real" Mastercraft belongs on a lake with skiers and wakeboarders and tubes and whatever in it, with your family and friends tearing up the water, not, standing in the middle of the boat looking for a fishing spot in the ocean.

ODBF brought up the Mastercraft 300, which we had never heard of.  Or, have heard of it but more in passing.  anyways, we fired up the google machine and got some pics and HOLY CRAP that thing is huge. 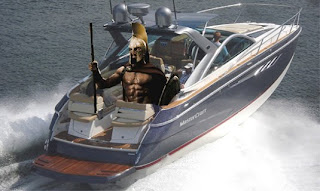 you had to say it, blot out the sun.  harf harf harf
My goodness, hopefully they sell a ton of these and make a regular x-star or whatever more affordable to us lovable, fuzzy idiots on our computers.
By Dig Dug at February 16, 2010
Email ThisBlogThis!Share to TwitterShare to FacebookShare to Pinterest
Labels: cranky tuesdays, hell hath no fury like a rykert scorned, Mastercraft, nola, randomly spotted