The Wall Street Journal takes a look at the boat industry and how they are dealing with the drop off in boat sales. 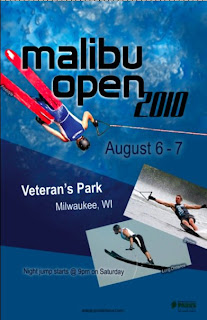 Looks like the Malibu open is going to be heading to Wisconsin (hopefully with out the good Doc!), and it looks like the wetsuit manufacturer Dolphin Wetsuits has answered my prayers and is putting up the cash to bring back Pro Freestyle Jumping. So needless to say I have sent an open invite to all of those cats to grab a beer and some Ritz Chips from the CRB Cooler.

Looks like the Pro Wakeboard tour is shutting down a small local wakeboard event. The CRB stands up for the little guy...or some such nonesense.
Ol' shred and dreds likes to post pics of people (Terry Winter) in...um...interesting positions. Terry this should be a lesson to you, dont invite Marcus anywhere.
Malaysian newspapers dont know what waterskiing is. Its a pretty simple equation actually: Waterskiing = Surfing? False
A very sad story from the Southern 80 International ski race in Australia. This along with Kyle Eades recent injury are reminders of how skiing gives us so much but it can take it away as well. Some sports respond so well to accidents like this, as can be seen by the hugh out poring of support for Kyle and some sports can respond terribly. The Luge federation has blamed the Georgian lugers death on his actions instead of doing all possible to prevent accidents such as this.
Chuck Rowe of Indmar has been awarded with USAWS educational foundations Award of Distinction. Also being honored are Dave Clark, Jack Lukes, Jay Bennett and Jack Wiley. That is quite the group! oh and Darin Shapiro is beign inducted into the Hall of Fame. Funny that slalom ski mag would only focus on Chuck Rowe cuz he gives them dollas and just note the rest as an after thought. Guys try not to ALWAYS look like shills for your sponsers. I know you are supposed to hold up their best interests but once in awhile a balanced story would be awsome.
Waterski Mag: We report you decide... Take note of the following:
For instance this article from the Times Colonist from NOT USA*, see how they cover everyone evenly and let you make up your mind about it. AMAZING I KNOW!
*Canada (hey its the olympics gotta root for the home team)
We have mentioned this chick in a previous Lake Trout cuz she is the host of some big show in the UK...I mean NOT USA...and apperantly the show is watched by about 7 million peeps with bad teeth. Well she skied across the English Channel to raise money for charity and this article talks about that or maybe about some guy getting fired...or killer lizards from space. What? You want me to actually read this stuff before putting it up here? F the F off and do it yourself.

Any Day you can get covered in nasty sewage flood water is a good day in Brazil.