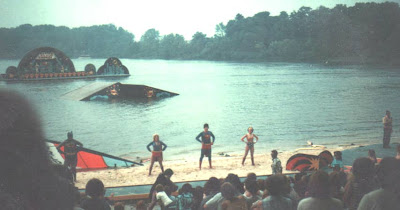 “In a new 45-minute show, written by award-winning Hollywood producer, director,
and writer, Dan Kibble, these [DC] heroes and others compete with a host of
super villains in the first ‘Annual Gotham-Metropolis Water Games.’ There’s
high-diving, jet skiing, kite-flying, and just plain fun as the heroes try to
out do the villains with their aquatic antics. Aquaman and Mera must surely be
the backbone of the superhero team, and it’s hard to see how bad guys like The
Joker and The Penguin would have a chance against them. Of course, those wiley
villains have never been known for their sense of fair-play, and might have a
few unexpected suprises for their foes.” 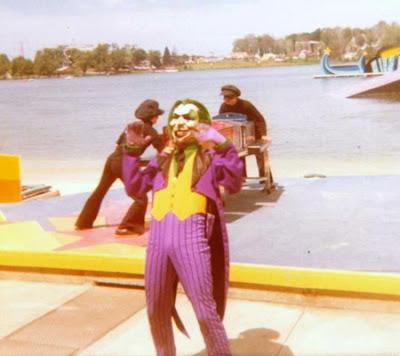 This guy probably gave many little kids nightmares. I think I will sleep with my night light on tonight... 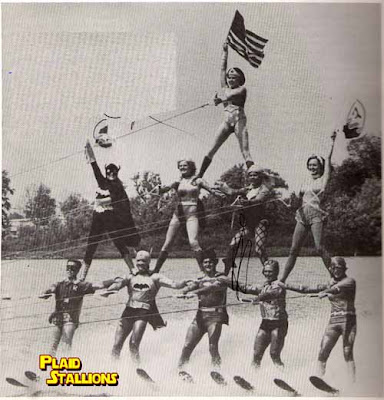 But the heros are here to save the day!!

According to Plaid Stallions there is quite the cult following with in the comic sub culture for this ski show. Comic book people are weird...Waterski people are so much cooler.

Seeing pics like this shows that at one time pro show skiing was once big and actually drew in crowds. There used to be shows at almost every theme park and even some stand alone shows, now only a few of those shows are still around. Even the mighty Cypress Gardens has fallen. Now one or two sea worlds still have shows, a couple shows in Europe, Japan, Tommy Bartletts in Wisconsin, and an occasional show in Guiana are all that is left.