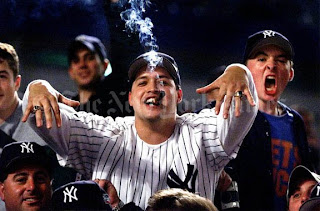 Great, the Yankess won the world series.  Awesome.  I am very excited.  Its been nine years since they won what seems like the majority of Yankee fans feel is their birthright.

I had attached a noose around my neck and was about ready to jump off my balcony, but, that plan was thrwarted as the rest of the CRBemployees pulled me back and soothed me with tea and a bowl of ice-cream.

There is no reason to hate the Yankee players.  They have done nothing wrong, besides being really good at baseball, but, you hate the Yankees because they have been good for so long and everything you hear, media wise, is so overblown you want to shoot your own balls off.

Its the Brett Favre thing, or the Red Sox thing, or the Tom Brady thing, etc etc.  Its when something is pounded down your throat for so long, eventually you turn against it and have an instinctual reaction to blind rage.

This is my anger for the Yankees.  They have good players and have the dolla dolla bills Y'all to pay them to come play there.  No biggie, its capitalism.  Fine.  Doesn't mean i don't want them all to die in a blimp accident, where the blimp crashes into the cast of "The Hills".

Not Audrina though.
By Dig Dug at November 04, 2009
Email ThisBlogThis!Share to TwitterShare to FacebookShare to Pinterest
Labels: hate, off sport, tired and drinking