You're Arm is Weird 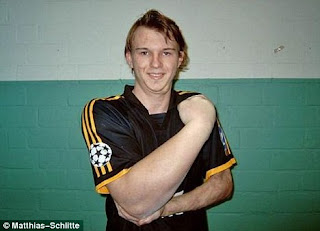 Its weird. Seriously, check out the article about him. Linky

We have like a million self-gratifying jokes about this, but, we won't use em...suffice to say...he can probably get to heaven in about two seconds.

This got us thinking about various other sports and the type of body that accompanies the specific athlete within that sport.

Take for instance a pro-tennis player, if you are right-handed, wouldn't you naturally have a much stronger right-hand / right-arm then your left? Your forehand is done exclusivly with your right hand and your back hand is only occasionally using your left arm?

Or, a baseball player. Think of someone like Albert Pujols, a right-handed hitter, wouldn't he use specific muscles to swing from the right side? I don't know 100% what each muscle is, but, think of a baseball swing, your left shoulder and right bicep/chest muscle do most of the work right?

Football is to complicated as there are a zillion different positions, so, its void in this case.

I suppose hockey, football and maybe track and field would require you to have an overall physique that didn't favor one or another muscle group. Does that sound about right?

A whole bunch of years ago I remember reading something about Sammy Duvall in which his chiropractor stated that he/she had never had someone with such a symmetrical body, meaning, the left and right side of his body were so similar. This reduced his chance for injury (probably because being a bad-ass is quite the aerobic work out). 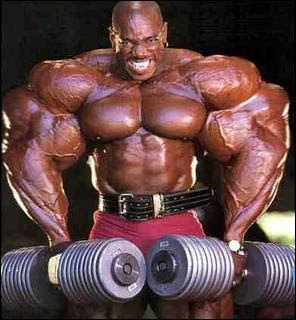 I cant fit in a wetsuit :(
Maybe we are just blowing smoke because waterskiing rules, but, can you think of another sport that requires every muscle in your body to be more in tune with what you are doing then waterskiing?

You have to have strong legs, a strong core and strong arms. Not necessarily muscle builder dimensions because then you wouldn't have any flexibility, but, more like a decathlete type?

And its both guys and girls (duh) and that makes for the best looking athletes anyways right?

There is no discipline of waterskiing that allows you to slack on any aspect of your overall body conditioning is there? Wakeboard? no. Jump? no. Slalom? no. Kneeboard? maybe. Showski? no. Barefoot? no.

Nothing. This is a sport that requires you to be at the top of your REAL physical condition to be good. Its similar to why race cars look cool.

For those of you who don't subscribe to Adam Carrola's Car Cast, you should, he had a neat point the other day about how race trimmed cars are cooler then their street counterparts because all the shit that is on the car is functional and the function equals form which equals bad-ass.

Think of it this way, you know all the dorks who jam themselves into gyms so their arms are huge and wear Ed Hardy shit to the bar and think they are cool? me either. they suck.

But functional form is rad. Its the same as visual horsepower on a ricer car. its stupid. Crap stapled on a car to try and make it look cool when in reality it sucks.

Point being, everyone wants to look rad with their clothes off and thankfully waterskiing is a sport that does that for you by accident.

Its foolish to think that we aren't all at least a bit egotistical and work our ass off to get better on the water but don't appreciate what that work translates to off the water. no?

For the guys, think of someone like Gina Cerrano, she is sexy as hell but a MMA fighter, she is put together in a way that makes her good at what she does and the sexy translates to the various websites and magazines that we all know her from.

To wrap it up. You won't find a waterskier type winning any sort of body building thing, nor will you see them as a model in a magazine, but, at the end of the day, when at a tournament or ski event of some kind, have you been around a better looking group of people?

and thats why waterskiing rules. Carry on.
Labels: extreme narcissism Nonsense waterski rules we are all hot as hell