The following is from an email we received. Thinking that I would get dizzy and probably puke up my PBR...so that means there will not be a CRB attempt at breaking this record, like we did when The Minion broke the complete nonsense post record set by the ODBF. (Hey that's me!) 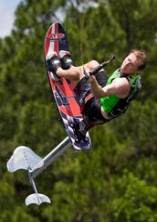 On October 20th, two weeks from today, I am setting out to break the current record for the most flips in an hour on a sky ski (hydrofoil water ski), which is 711, set last year. Bill VonZaburn is the current unofficial record holder. My goal is 800. If successful, this will be an official Guinness World record. I will have The Water Ski, and Water Skier magazines out for this attempt, as well as a few local publications, and I will have video from at least 3 cameras for a short DVD, you tube, and other media outlets, as well as a photographer separate from the mags for future usage.

And for reference to his skills just watch this.
Yep, he looks pretty good.
By Old Dirty Bass Fisherman at October 09, 2009
Email ThisBlogThis!Share to TwitterShare to FacebookShare to Pinterest
Labels: big air, flips, hydrofoil, World Record