So a little while ago we mentioned that Geno Yauchler was going to make an attempt at the record for most consecutive flips on a hydrofoil, and he did it. 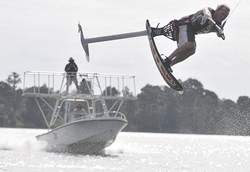 Bill Von Zabern set the unofficial record on Nov. 3rd 2008 with 711 flips (official record was 529 by Greg Gill). Geno smashed both the official and unofficial flip records with 826 flips in one hour on his hydrofoil.

Ok so that is one flip every 4.34 seconds for a full hour...ugh
/gets dizzy
/falls down

Missed this the other day, but, waterski mag has a vid of it and some more pics. Good stuff. LINKY