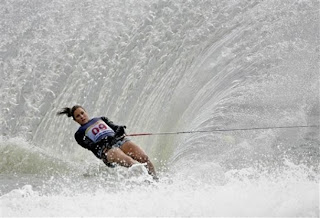 So, this is a nice story..and a bit unfair to the rest of us self-absorbed jerks out there.

Regina Jaquess (pronounced: Jaquess) just won an award from the US Olympic Committee for basically being cool as hell. Long story short, she basically gave her ski to a fellow competitor, a girl fighting for the same spot on the US Elite Team, because the other girl (Carolyne Hensley) had the wrong ski in her ski bag and didn't have time to find it. Its more complicated then that really...here, just read this. Its way easier then trying to explain it.

Jaquess, a former U.S. Elite Water Ski Team member and world champion, and up-and-comer Caroline Hensley were both competing for a coveted spot on the U.S. Elite Water Ski Team. Hensley, participating in this event for the first time, arrived at the slalom starting dock anxiously waiting her turn. When it was time to start her final preparations, she opened her ski bag only to find that it did not contain her ski, but someone else's. There was no time to try to locate her own as she had to be ready to ski when the boat returned from pulling the prior competitor. No deviations are allowed in the seeded running order, only disqualification. However, as Jaquess was the next skier after Hensley, she was near the dock at that time and knew full well that she and her competitor used the same brand and size of ski. She immediately offered hers to Hensley even though this gesture would put her in a potentially risky situation. If Hensley fell or did not return to the dock with the ski, Jaquess would be immediately disqualified for failure to be ready to ski when her turn arrived as spelled out in the rules of the sport, unless, of course, she could borrow a ski herself. Despite the possible ramifications to her quest to make the team, Jaquess still insisted that Hensley use her ski so that she would have the best opportunity to compete for her own place on that very same team.

Now, you may be asking yourself, "self? if the CRB was in that situation what would they do?" Natuarally, we would have to wonder how on earth we switched bodies with Regina, and who would now handle the rigoures day to day responsibilities of running this multi-national corporation.

Easy answer? Screw it, we rule at skiing now, so buzz off! Here we come Masters!!!
By Dig Dug at September 09, 2009
Email ThisBlogThis!Share to TwitterShare to FacebookShare to Pinterest
Labels: awesomeness, olympics, Regina