And no not "that" issue (although we would not mind), but in the SI Faces In The Crowd segment.

It has been awhile since a waterskier has made it into SI, last time I can remem 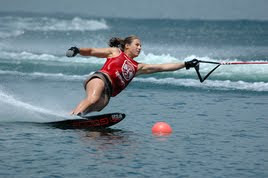 ber was April Coble back in the '90s. There have probably been some others but none that I have seen, not that I really check it all that often. Regina certainly deserves the recognition, tieing one world record and setting 2, not a bad july for her. Cool vids posted on SI.com as well.

Now back to the swim suit issue...Lets get on this idea Slalom Ski Mag! Who needs talent when you have sweet bodies! Just look at the LPGA or Womens Tennis.

**update**
Since this is friday, we would be remiss if we didn't mention this.

Have a kick-ass weekend, buy a wakeboard and work on whirlybirds! Or, maybe just, get down with your bad self.
Posted by Old Dirty Bass Fisherman on August 28, 2009

Email ThisBlogThis!Share to TwitterShare to FacebookShare to Pinterest
Labels: faces in the crowd, SI.com, Slalom