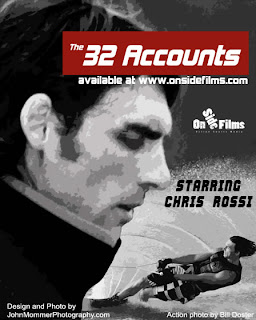 Its really an interesting task to try and review a waterski video when you are a waterskiier yourself, in that, you try to watch the video and think of ways in which to communicate what you are seeing and translate those thoughts into the written word which you pull up on your computerized google box.

Its tough because half the time you think, "Damn, those people are gooooood!!!' Its irritating. And it happens over and over and over, all the skiers in this video are WAY better then I am and you just go bonkers.

Each skier, or group of skiers, has their own little vignette in which they chat about their lives, their ski lives, their competition, etc and its great, but, damn if I didn't forget whatever they were talking about immediately when the ski footage started.

"32 Accounts" is shot so well, the images are so well done that you get wrapped up in watching the skiing and marveling at what you are seeing.

For example, as anyone who reads this site knows, we are firmly on board the Karina Nowlan train for any number of reasons (you can probably figure that out on your own), but, she had her cool little scene complete with a couple old school vids of her skiing as a kid, running around on the beach, etc, but as soon as the video of her skiing now started you just sort of get lost in watching her ski.

Or the scene with Zach Warden and Jon Travers, they horse around and give each other shit and everything, but, then they start skiing and you just go, "damn", of course, this is before June Fladborg punches both of them out. Take that!

I think that is a credit to the people who filmed and edited the movie together, however they set up the cameras, however they thought out ahead of time what angles to use and all that, because you feel like you are right there watching these people ski.

No, thats not 100% correct. We were lucky enough to go to the LA Night Jam this year and seeing the skiers up close and in person is really something amazing. The speed they carry into the ramp, the height, distance, etc, or what they do is not something that can be transcribed onto a TV screen no matter how hard you try.

So, with this video, what it does is not really make it feel like you are there, its different. You get to see views and angles and shots that you would never get if you were there in person. You see how strong the slalom skiers are rounding the buoys or how hard the jumpers hit the ramp and you see these all in such a unique angle that you just get lost in whats happening.

Its really amazing. When it was over I found myself going, "MOAR PLZ!"

I am not sure if it was intentional or not, but, either way, there were a few scenes or vignettes, that provided a break from the ski fest, and in an odd way, it was nice to have a few of these that broke up the video.

Chris Rossi's scene was all about snow skiing and the camera people certainly have that talent as well, and it was a neat view inside someones life who we all know as a skier but, in a different realm. Plus, he dropped the best quote from the whole movie on us.

"Its not the art of getting scared, its the art of questioning yourself and your abilities, then having the confidence to persevere through that."
Love it. It works on so many levels, but, mainly its not a stupid throw away like, "if you don't fall you aren't trying hard enough" or "I just wanna have fun", its an actual look, from a different perspective on what makes the man tick. It can be applied to everything.

Ray Stokes scene was cool too, as he jumped out of an airplane. Insane. I love it.

The most shocking, thats not the right word, but the only one I can think of, is the Nicole Arthur and Aidan Willers scene. Aidan suffered a pretty horrific crash and his arm was a mess. Its such a counterpoint to the beauty of the rest of the video in that it shows that, yes, this is serious business and there can be consequences. Thankfully it said he regained the use of his arm. :)

Finally, the scene with Freddy and Jaret is, pun intended, very full of win. These two dudes have pretty much dominated the jump scene for along time, and, its really interesting to hear them talk about it. It may, at first blush, sound really arrogant, but, its really not arrogance when its true. These two guys who are from a cosmetic perspective very different. Different countries, different sponsors, different boats, skis, etc, but yet they are really, at their core, the same person. Guys who thought of nothing but being pro jumpers and having accomplished that and accomplished domination within the sport, and now actually look to each other for motivation to do better.

There are a bunch of other scenes as well, not just those, and I have my little notebook filled with things I liked about them. Jotting down what you like about something vs. complaints is so much better. Oh, and Will Asher skis in a suit. Which is most likely not the best for range of motion, but, damn if he didn't look put together!

Here is another thing that I really liked, was that, not everything was slo-mo. One of the things that I don't like about some of the various ski videos I have seen in my life is the reliance on the slo-mo shot of a slalom skier turning a buoy or a jumper flying. It may look pretty, but, after awhile it gets old.

In referencing the speed of the skiers and the strength of the skiers, when you see something shot well in normal speed its even more of a thrill. There was alot of the slo-mo shots in this video, but, a whole bunch of regular speed shots and honestly, seeing a slalom run from start to finish in regular speed from a cool camera angle is fantastic. Again, it really conveys how difficult it actually is.

One of the things I would love to see moar of...err, MORE of is the slalom run, or trick run, or jump or wakeboard run, in its entirety. Quick cuts and everything is nifty, but, there is an awful lot of majesty in a regular speed, full run, shot from a cool angle. Our sport, maybe unlike alot of others, is FILLED with majestic moments that can't always be captured with editing. I know there is a video somewhere on youtube of, i believe, Freddy Krueger nailing a 200 some foot jump shot from some dude on a camcorder and it is probably the single coolest waterski vid ever.

Meaning, the epic nature of what our skiers can do doesn't have to be cut down into bite size pieces, its so good on its own merits and this video does allow for that in places.

Which is probably the best compliment you can give a video such as this, that you actually get a sense of the person skiing as well as how difficult this sport is and how good they are, however they got to that point.

You may be thinking, if you have read this far, "wow, this is really some sort of love-fest" and you would be correct.

Its that good, is it perfect? no. The only perfect waterski video is the one that hasn't been made yet of me beating Freddy and Jaret in a head to head jump competition where I fly 300 feet into a big pile of chicken wings, beer and my future wives. Until then, we should all support the people who do this work, who put forth the effort to make these videos and, instead of tearing things down, compliment what is awesome so future videos, "64 accounts?", will be even better.

Overall, "32 Accounts" is spectacularly shot with awesome skiing a nice slice of humor and humanity as well as a nice look into some of our best skiers lives. Its worth the cost and much like "Gifted" before its a movie that the more you watch the more you enjoy it.

CRB would like to thank Tadd at H2oProShop.com and Ryan Saywer both for sending us copies to review.

If you have a product you would like us to review hit up the contact POS CRB car.

***UPDATE***
Check out http://www.h2oproshop.com/ and talk with the man, the myth, the announcing legand Tadd and ask for the CRB discount (free shipping) and he will ship this sweet vid right out to you!

***UPDATE 2****
I mentioned in the Freddy / Jaret part about the youtube vid that I love. I can't find the exact one, but, here are four vids that illustrate what I was saying. Isn't watching the whole thing from a wider angle at normal speed freaking awesome?
Freddy 1
Freddy 2
Freddy 3
Freddy 4
By Dig Dug at August 23, 2009
Email ThisBlogThis!Share to TwitterShare to FacebookShare to Pinterest
Labels: 32 Accounts, review, waterski love