So as I was reading the always informative Exec Director report I see that skiers in states that are not where the CRB global headquarters is located are experiancing the same issues that I have seen here. ie low turn out in younger age brackets. why is this? why does it seem like all of our skiers are in Mens 4? Well it could be that those running the events are all the mens 4 skiers that take skiing way to damn seriously! Now dont get me wrong, when I am on the water I, like said mens 4 skiers, am doing all I can to get another bouy or that trick that Ive been working on all summer, but serously, if you want the numbers then take a note from collegiete skiers...PARTY!! WOOT!!!
Or how about have some fun with skiing. Put together a team competiton or a relay race. A relay race you ask? how does that work you ask. Well shit I dont know, your smart you figure it out!! Just have fun! While some of us may live this sport, for it to to be as succesful as it once was we need to bring the fun back into it. Have a big cookout, encourage competitors to bring their families, have a band or DJ play at night and for god sakes have fun! Im so tired of listening to people at tournaments spend the whole day bitching about how fast its going or how their kid deserved a reride when they fell early in a run. You know what if they deser 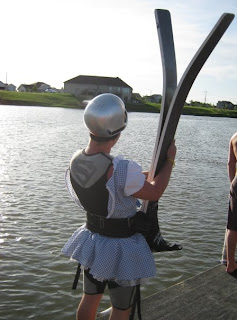 eved a reride they should have asked for one, if they did not get it well then they must not have deserved one.
I have a friend who jumped in the 170s, ran into 35 and tricked about 3k and he quit skiing competions because the fun was gone for him. Skiers like this are the ones we need to keep around, they obviously put in the effort and trained to become good skiers but if we can not keep a skier who has obviously put in alot of time and loved the sport that how are we going to get new blood to come in? As a sport we need the pros and we need the mens 4 guys who have put in their time and know how to get events put together, but lets have some fun with it at the same time.
I often joke that we are in the richest of rich kid sports. Hell just look around your private lake the next time you head out and what do you see? Exclusivity thats what I see. The reason I like show skiing is not because they have the best atheletes, but because they do by far the best job of bringing in new blood. When was the last time you saw 15 kids under 10 at your lake learning to ski? Some private lake clubs do a few learn to skis a summer and thats great, but how about working with the local high school to get a club started there and give them one night a week to come out and learn to ski. Stop adjusting your fin for a second and think about it, wouldent it be awsome if you showed up to your state tournament in a few years and saw 40 skiers in mens and womens 1? I have won overall multiple times at my states and I have crap knees and cant jump for shit. That makes me sad, now I dont mind bringing home some hardware but really should a guy doing a ride over or light singles be able to win overall? Hell there was one year that there were only 2 of us competing for overall. How is it that the NCWSA events can have upwards of 500 pulls in a weekend and we cant field more then 50 or so skiers at a state event?