Some sick sking at the second Mastercraft Pro tour stop in Catawba, NC. Eleven passes through 39 into 41 in the semi finals and finals. It was some of the best skiing that many of the judges say they have seen in awhile. Yet, we are the CRB so we are going to find somthing wrong with it. What we found wrong was somthing that is seriously hurting our sport as it is. There was like 20 people there all weekend, I believe there were actually more pro skiers than there were spectators. A major problem was the fact that the site was in bumblefuck North Carolina. There was no publicity for the event so no one new about it. There were local skiers who found out about it Sunday while they were at a gas station and saw some pros...seriously?!?! I understand that there is no money in skiing but ouch man. Moving on to the skiing. Fun fact: the property of mirror lake was Dale Earnheart Jrs, he should have skied. 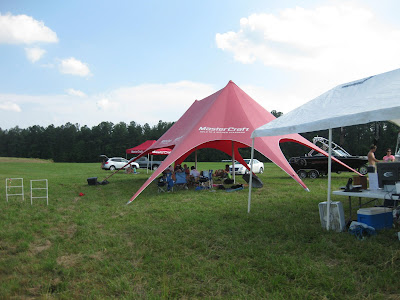 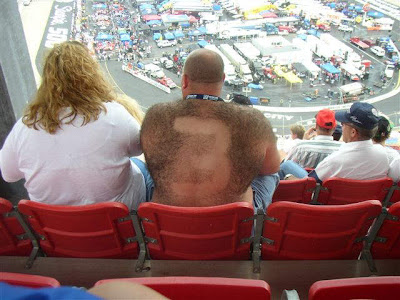 What the crowd could have been
As said earlier the skiing was amazing. One guy who came out with avengence was Ty Openlander, he brought himself to Sunday, not bad for a guy who has been out of the scene for two years. The girls and boys battled it out hard. The morning started off with the girls:
It began with Whitney McClintock facing off against Rhoni Barton Bischoff, Whitney dominated by 6 buoys with a pass of 3 at 39. Karen Truelove (yes the woman who just had a child like 3 months ago is competing in a pro tournament) beat Nicole Arthur with 5 at 38 to Nicole's 4 at 38. The very pretty Karina Nowlan defeat Hana Edeback with a full pass at 35 to Hana's 3 1/2. The final female matchup of the morning was April Coble taking on the other Edeback sister, Josephine with 2 at 39 to Josephine's 3 at 38. Setting up the semi-finals to be McClintok v. Truelove and Nowlan v. Coble. Then the boys came out to play.
Well here is how the semis came down. First up was Will Asher and Jamie, Will skied 1 1/2 and 41 and Jamie won it with 3 at 41. Next Ty washed out around 4 ball at 39 giving him a score of 3 1/2 at 39 leading him to fall to Parish who got 2 at 41. Facing Thomas Degaspri, Jon Travers wins with 1 1/2 at 41 to Thomas' 1/2 at 41. The final faceup of the morning was was Marcus Brown (the predator) against Chris Rossi. Rossi defeated the predator with 3 at 39 while the predator knocked down 2. This left JB to face the tower and Jon Travers to battle it out with Chris Rossi. 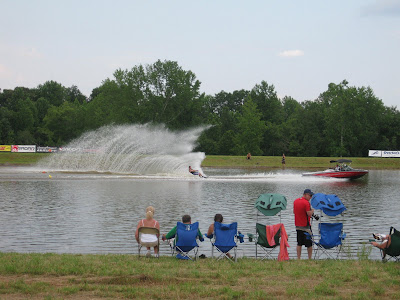 Before the boys could finish the girls battled out the title. Other than an annoying jackass in a canoe trying to take pictures.... 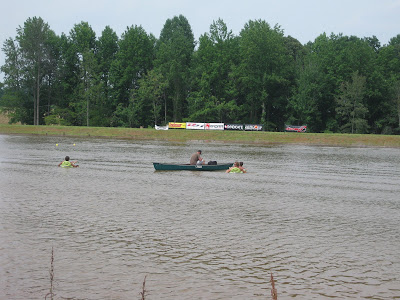 Hey wait that is the editor of slalom ski mag...Todd Ristwhateverthefuck.
Whitney fell to Karen by 2 buoys with Karen taking a whole pass at 38. That put Karen on the dock (and Freddy on the shoreline) to see who she would battle it out with in the Finals. The next round between Karina and April required some big time skiing which saw April washing out around 1 ball at 39 while Karina catches 3 buoys at 39 taking her to the next round. Now that is a huge score, and Karina has to ski right away against Karen...without a break. Once again the ladies take it to 39, and Karina ups her huge score of the last round with 4 at 39 to beat Karen who gets 1/2 at 39. Making the first tour stop look alot like last year with Karina rocking the hizzzhouse.
Time for the biggins to hit the water. The first round of the male semis started with a epic battle of Chris the Tower Parish vs. Jamie Beauchesne. These are going to take it in to 41 and they take it hard. JB throws down 2 1/2 at 41 and call Parish to go big or go home. Parish replies with "I am the TOWER BITCH!" and comes back to the wakes for 3 at 41. Next up the young guy JT against Rossi. JT slips out around 4 at 39, after a temper tantrum in the water Rossi runs 39 to take on Parish. These boys go deep yet again and Rossi throws down 2 at 41 to be answered with a 1/2 a buoy by the Tower to win with 2 1/2 at 41. It was a very emotional win the the big guy and we at the CRB are glad to see him back up there. Personally I think if he keeps skiing that way some major damage will be done this year.
In Summaray: Mastercraft Pro Tour Stop in Catawba, NC= kick ass skiing, shitty crowd. Hopefully the turnout out in Grand Rapids, MI will be better!
Posted by CRB Minion Reincarnated on June 16, 2009