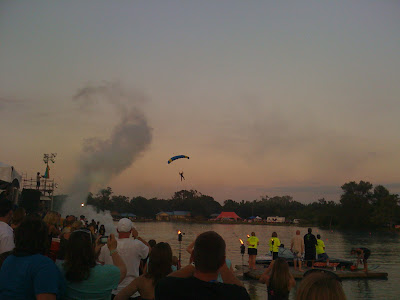 LA Night Jam began with some sky divers and got better from there!
One of the things that we have tried to do with the CRB over the course of its little existence here in the tubes is to try and offer solutions to problems when we bitch about something. It doesn't always happen, but, that's the goal.

Nothing is worse then listening to talk radio, or idiot political pundits, or people at a bar, or wherever/whatever, that all they do is complain about things. That is something that is really easy, to pick at the nits, but, to actually offer a solution takes something else. Its not always easy. For example, you complain about the baseball all-star team, that player X shouldn't be on the team, or Player Y should be. Well, who do you replace that person with, or whom do you take off the team for the other player?

Its not so easy when you have that decision to make.

One of the issues that face the sport of waterskiing is translating the actual skiing into a package that is digestible by people watching. Say what you will, but, record capable tournaments or anything else there is out there, is worthless if no one watches.

Its sort of the tree in the woods falling down and only a deaf/mute dog is there to hear it, but, the dogs gets nabbed by aliens.

Long story short, people need to see and hear this sport to actually keep that connection to what it is that we do.

Years ago, seeing some pictures and reading a story in a magazine was good enough.

Shoot, remember when ESPN had hot summer nights about 15 some years ago? We actually got to see our best skiers on TV. We actually had some tangible connection with the people that actualy make our sport tick, that push things forward.

Then all of a sudden...nothing.

No more TV, the magazine world was pretty dull. Waterski Magazine is way better now, there was a trick-skier on the cover the other month! Thats progress!

Our sport is more then a niche, nothing, lame-o sport...then again, its not quite big enough, or with enough heavy sponsorship dollars behind it to get it on "real" TV, like, Versus or ESPN or something, sure its occasionally on something like ION or other fringe stations, but, nothing to really draw you. We don't really have that singular traction aspect to really gain leverage on people.

Occasionally there is some wake-boarding on TV, but, normally it appears as part of a large event, the X-Games, the Dew Tour, etc. Which is awesome, it gets the waterskiers from that discipline on the water and gives their sponsors some big-love.

The reason for this, or one of them anyways, is the simple fact that waterskiing is a difficult sport to package together. You can't really televise it live in a traditional format. Two-straight days of skiing and trying to keep scores together and with attention spans and whatever else?? Its not going to happen. I love to ski and love being at tournaments and I get bored and wander off and do other things...notably find a beer tent or cooler somewhere. Waterskiing, traditionally, is a boring ass sport to watch unless you have a dog in the fight. 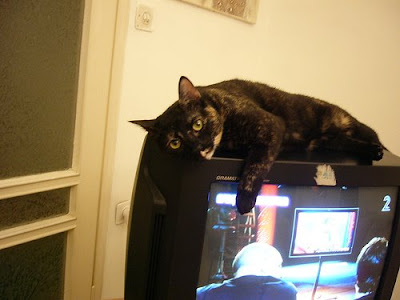 zzzzzzzzzzzzzzzz
So, its easy to complain about this right? But, what the hell do you to in a way of a solution?

Thats the tough thing, there have been some pretty cool ideas recently, things like the Big-Dawg style event, the rise of web-casting, night-events, and more.

What this all adds up to is this, whoever initially decided to do a night jump, the initial one was in London right?

Well, we have never been to one until now, and here is what we think about what we experienced that night in Zachary.

That is the future of our sport.

The LA Night Jump was the coolest, most kick-ass, waterski event we have ever been to, and we have been to a lot of various events, but, nothing came close to what transpired.

From when we arrived in the Trans-Am at around 5 PM, to whenever our D.D took the keys, there was never a lack of things to do, look at, drink, see, do.

Hopefully you saw the web-cast of where there in person, because I am not going to re-cap, but, it actively held our interest for the entire time, from the barefoot demonstrations, to the pyro-chick, to the skydivers, to the beer, to the jumpers, to the actual skiers, to Tadd and Tony on the mic, to the night-time aspect.

The night-time aspect is crucial to this as well. 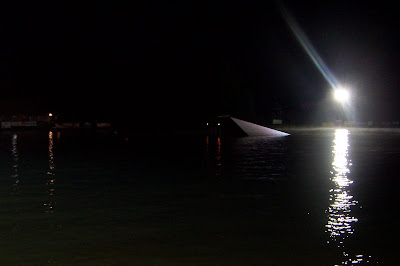 LA Night Jam
Here is why, waterskiing as a sport in scale is pretty large. There is alot of set-up time, alot of real estate, alot of freaking stuff to distract you...that tree, the bird, that girl in the boat, that guy in the boat, the fish in the water, the sun, etc etc. But, at night-time, with a spotlight on the skier and darkness all around, your attention is focused, your vision is narrowed.

If you have ever seen a show-ski team perform at night, you will understand what we are saying, its to much to take in with such a large back-drop of an entire lake, the sky, etc. Any sporting event we ever go to is limited or focused on its playing field.

Waterskiing really doesn't have that.

Everything is focused on the skier, and what is on the water. All the ancillary stuff surrounding the lake, the boat, the skier, are all blanketed in a heavy fog of black. Thats your backdrop now!

Its like being at a play. Its hard to watch a play in a park, because you can see the whole damn park. See one at night, and you focus on the stage.

None of all this matters if the logistics of the event are botched.

That was not a problem. The people in charge of the event, Amy Bing and the Bennetts, should freaking bottle whatever it was that they did and sell that shit to everyone else who ever runs a waterski tournament/event. It was that good. You never saw anyone freaking out about what was going on, there wasn't any dead time, Tadd and Tony ruled, there was food galore, the weather was awesome (suppose that is out of their control), parking was easy, the place was beautiful, and in the end, for this specific waterskiier and fan it totally re-invigorated my own excitement and love for our sport.

Going back to our original point, if you can't offer a solution to something you are going to bitch about, well, shut your mouth. The LA Night Jam is, in fact, the solution.

Hopefully other organizers and whomever can utilize this template and really go out and build.

Furthermore! haha, you thought you would be done with this after the first 1,100 words. You thought wrong, we are going CRB Long-Form

We would be remiss if we didn't mention some of the actual skiers in the event. Most of the skiers hung out afterward, mingled with people, and generally were rad. There was some fun shenanigans going on somewhere that we heard about, but, yeah...that pretty much happens everywhere, no biggie.

But, hey, this is the first time that some of us have seen these people in the flesh, so, seeing dudes like Freddy, Jaret and Ryan in person was something else...its hard to explain, but, you see these guys in video clips or in magazines or whatever all the time, and then to see them in person its kinda shocking.

For the girls, we were excited to see Angeliki Andriopoulou!! Yes, before you ask, Tony Lightfoot did say her name and it was glorious!!

Now, super quick side tangent, we noted that CRB Girl Karina Nowlan in waterski magazine and how the pics didn't do her justice, well, in the same vain, none of the pictures of the girls that competed, June, Alex, Etc, do them justice.

Maybe its seeing the people in person, but, everyone looked more like humans and not gods...its hard to explain, but, anyways, thats what it is. Put it this way, pretty sure that a few of the guys on CRB Staff were pretty smitten.

The competitors were hanging out with people, drinking beers, talking shop and spreading the love. We actually got to meet a few of them, got to meet Tadd and Tony, watched a drunk dude try and ski around on a pair of jumpers and completely wipe-out crossing the wakes, all in all it was awesome.

Here we go, here is the final round-up of my whole entire point. Ready? I bet I can do it.

Our sport is unique in that the skiers, both the best of the best and the not best of the best, can have at times a equal say in the events and direction of the sport. We, and i use we as a collective of skiers and not the royal we, all contribute to the final outcome of our sport as a whole.

That is why such great advancements, like web-casting and such, can be done because people can band together, either over beers or on ski-fly or wherever, and it seems as if the people who actually compete and enjoy the sport are also the ones who help shape the future. 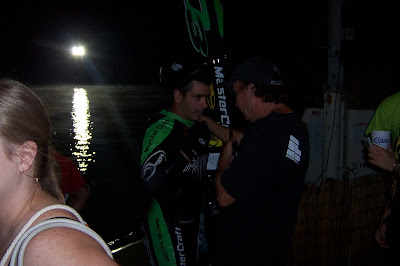 The winner. *yawn* what else is new?

Freddy, when he was interviewed either in the water or on stage, was pretty emotional or passionate, about supporting the community of our sport, noting that there wasn't a Chevy or whatever as a title sponsor, but, yet, in these economic times that there was probably at least 20 or 30 companies that stepped up and gave money to both advertise for themselves and also support something they believe in.

And THAT, I think, is the crux of the whole thing, this event, the LA Night Jump brought everyone together as a microcosm of what we all can do as waterski community, what we can do to push this sport forward.

So, beyond just how excellent the event was on its own merits, it also seems to have provided the template future growth, and that is why the LA Night Jam was so memorable.
Posted by Rowboat Abides on June 09, 2009