So this was originally going to be a post about the new Nightmares. The new Mastercraft Prostar 190 Nightmare eddition. As well as the newest edition to the Krueger Family, Dash a much smaller nightmare but just as powerful. Congrats to Freddy and Karen on there new baby....well was new on March 17th, but were behind the times.

While looking on Mastercrafts website for pictures I came across this crazy link that said "300" SO I was totally like lets click on it and see where we go... To my dismay there were not 300 dead Trojans. WTF Mastercraft what the hell is this thing? 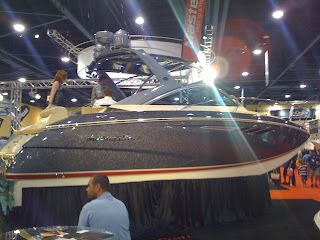 Believe it or not folks that is a boat made by Mastercraft. According to mastercraft.com "It [the 300] is the first twin tipped day yacht." Whatever the hell that means. Its a yacht, watch out Sea Ray, here comes Mastercraft. Next up, jet boats! The yachts at the local yacht club are lauging there asses off. Stick to what you know...ski boats.

By CRB Minion Reincarnated at April 10, 2009
Email ThisBlogThis!Share to TwitterShare to FacebookShare to Pinterest
Labels: Mastercraft, The Industry, THIS IS SPARTA