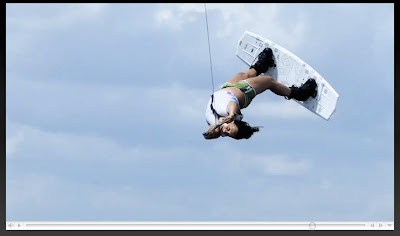 Click Image For Video (Via: thewakeplace.com)
The above screen grab is from the WakePlace.Com which is a, get this, a wakeboard website! No way!

Raimi Merritt, above, is the first girl ever to complete an S-Bend. Which is a pretty sweet looking trick, not quite a whirlybird, or our favorite and patented move, the double spin/half flip/to face move that always gets the attention and admiration of no one.

Via both USA Waterski and The Wake Place comes the video and the "story" behind it, it goes as such...from TWP.

Raimi Merritt is the answer, and she did it today (Monday 16th March 2009). We headed out to Darin Shapiro’s place at Ride The Spot to shoot for the morning, and Raimi for sure got the Trick of the Year as far as the female side of the sport is concerned. She nailed it on her second try behind the boat out at Darins, and is a real cool example of how cable riding is making boat riders better. Raimi has been on the Sesitec System 2.0 for the last 2 months, and then took her Raily’s and S-Bends to OWC on the regular cable. It didn’t take too much effort from her to bring it to the boat and raise the bar for female wakeboarding. Congrats to Raimi!!!!

We will be bringing you more from Darin’s soon!

Ride the Spot? ok. I like it. it works. Besides, how can you make fun of a name of a lake when its some dudes personal lake? you cant. We would call the CRB lake the "Stomp Swamp" and fill it with algae and crocodiles and it would still be cool.

Oh yeah, an S-Bend is basically a Raley with a 360 mixed in. Not sure how the S part works, but, its sweet.