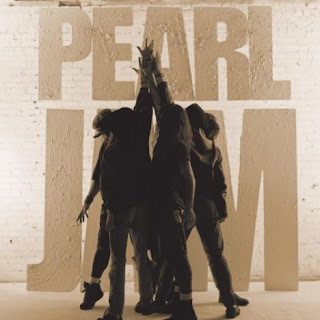 A long long time ago, in a previous incarnation of the CRB we had a little post about music and what you listen to before/during/after skiing, be it to get you pumped up, to settle you down, whatever.

Well, just recently Pearl Jam re-released their epic first album "Ten". Which in and of itself is pretty cool, but, nothing special. However, they re-jiggered the album on the second disc of the legacy collection (I don't know either...guess there are a few versions). Anyways, its a so-called re-imagination of the album.

Its not remix like, club beats and method man rapping, but, some tweaks to the productions, bring to the front some of the strengths and quieting down or moving back some of the weaknesses. It makes the album feel both more raw and at the same time more personal and engaging. A strange combo.

Probably because I have listened to this album to the point of wearing out my CD. Yeah, that's technically impossible, but, its scratched to shit, has sat in our boat for years on end.

It was an album that just played non-stop forever, and listening to it reminds me of floating around after skiing all day, drinking beer, relaxing and, of course, chasing girls.

Well, the news of the remastered, redone version struck me as almost blasphemous, how could you go back and change what is really a seminal album of one of the best bands from the last 20 or so years?

So, with a dubious mind and skepticism in my brains I ventured forth and god damn was that worth it.

It was like being transported back in time while at the same time being very much in the present and appreciating something that is both timeless and at the same time timely. Does that make sense?

It wasn't even a total nostalgia trip, its amazing how the music holds up and kicks as much ass as anything today.

I can't find a clip of the re-done "Porch" but, here is their version of it from Letterman a year or so ago, which was epic on its on. Long story short, if you are younger and don't realize how good this band was, or for that matter is, but, Pearl Jam was a band, almost 20 years ago, that blew the doors off anyone else out there. Sure, Nirvana was at the same time, but, Pearl Jam was something more...it was a thinking mans grunge band, equally confident in both rage and pain, in hate and empathy.

Its amazing when you listen to the re-done version of Ten. It both takes you back in time, and at the same time puts current music on notice that, Yes, in fact, this is how music should sound and feel.