Thats Not Your Boat 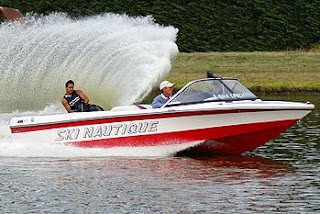 Many people, in fact, most people, at least those who aren't complete and total assholes, go about their lives in normal ways, wake up...go to work...pay bills...walk their dogs....oogle pictures of scantily clad girls on company computer, you know the normal things!

These same people, lets call them "good" people occasionally reach a point in their lives when they decide that they want some sort of luxury item, something to provide them with some pleasure away from the day to day grind. Maybe they want a fancy sports car, maybe they decide to take flying lessons, maybe they purchase a classic car to fix up in the garage, maybe they decide they want to get a ski boat to take out on the lake with a family (hopefully their own).

So, they begin to budget, put some money away, maybe skimp on the handle of Jack for the weekend and instead go with Jim Beam. You know, trim some fat.

After a bit, they can then afford this luxury item, so they go to the local boat dealership and pick out their weapon of choice.

These "good" people then enjoy the fruits of their labor with a big smile, some tasty beverages and probably a sun burn.

However, there is another group of people, lets refer to them as "bad".

These people decide that instead of actually working towards the object of their affection, they decide to steal it. Because, as everyone knows, doing things the honest way is for losers.

Oddly enough, this group of people, the "bad" people, actually have organized into a world-wide group, complete with a online membership, yearly parades and festivals, lapel pins and awards for achieving great heights of dickholness, secret handshakes and syncronized STD treatments. This group affectionatly refers to themselves as, "The Scum of Society" or "SOS" for short.

One of the more heinous, or notorious, chapters of the "SOS" reside in Oxenford, New Zealand. Within their social circle they refer to themselves with silly pet names, such as, "dickless piece of shit" and "socially awkward loser" and, a CRB fave, "Mr. Poopy Pants". Its funny because its true.

Anyways, the object of their desire was a new Ski Boat, in fact, they had their eyes on a new Ski Nautique 196 (Pictured above on the right, in better times) and figured that the best one around was currently owned by the Gold-Coast Waterski Club.

The Oxenford Chapter of the "SOS" realized quickly that the actual owners of this boat were obviously a bunch of suckers and didn't deserve this fine piece of equipment that they had obviously worked so hard to obtain and THEY WOULD TEACH THEM A LESSON!

So they did, they went and stole their boat, a $50,000 boat, because why not? And for gosh sakes, they didn't need their slalom course, so they nabbed that too. Oddly, for being a bunch of losers and dipshits, who have never had any sense of personal responsibility or ability to complete any meaningful task in front of them (including, school, reading, urinating, pleasing a women, etc) they were somehow able to pull of the heist without impaling themselves on street signs, driving their cars through the water or sticking their dicks into the ciggerete lighter.

After obtaining the groups charter statement, which was written on a napkin in crayon, it states that these people are bound for a life of poor choices, karmic retribution and general douchebaggery followed up by a life in hell being burned alive over the course of eternity.

If only that was the case.
By Dig Dug at February 13, 2009
Email ThisBlogThis!Share to TwitterShare to FacebookShare to Pinterest
Labels: adventures in douchebag, Stolen, stolen boats