For those of you who have been paying attention to this little chunk of the waterski blog tube, you know that every so often we like to poke a bit of fun at Waterski Mag for the incessant covering of slalom skiing.

Its all in fun, obviously, as we do have slalom skis of our own (in all fairness, we suck at it).

However, it is a decent rag and in the most recent issue, super sexy CRB commenter, Tadd Schreiber, wrote a piece where they tested some of the top slalom skis.

If you don't know which one we are talking about, its the March issue, the one with Karina Nowlan on the cover (RAWR!!!!).

(Note: Karina skis on the Goode 9800, which wasn't tested (boooo) and there is a picture in the mag of Freddy Krueger, that picture is just awesome...its hard to explain, but, it looks like it was taken from like 20 feet up and 20 feet in front of the ramp, catching Freddy in mid-flight, its amazing. If we could purcahse that pic in a frame we would.)

Normally, we would look at the prices of the skis and go crazy and belly ache about the cost and somehow turn that argument into a grandiose piece on the state of the world and skiing and predict locusts and raining frogs and celebacy.

In lieu of that, and given the tone of Tadd's article, which was nice, instead of tearing down the skis and pointing out flaws, they tested the skis and pointed out the the benifits and how it would make you, the skier (and moneybags mcgee) a better skier.

Within the piece there was no real ranking system, so, we immediatly hopped into the CRB Camaro and made our way to HQ to fire up the Commodore 64 matrix device.

Here was our goal, to somehow weight the skis, taking into account their price and number of expert picks. I.e, we tried to somehow mesh the performance of the ski to the cost.

This, however, proved to be quite difficult, as our math skills seemed to have evaporated a bit.

So, I ran the excel machine and came up with a few things...so...appropoe of nothing, here is what we got. 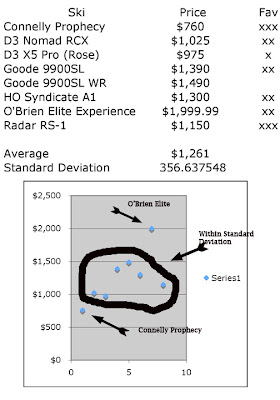 What can you possibly take from this? Well, of all the skis tested, the Connelly and the O'Brien are the only ones that fall outside of the norm, they are the outliers, the remaining skis are within about 350 bucks of each other.

However, of note, the Connelly, as the cheapest, also received three fist bumps from the pros where as the O'Brien received two, while being more then 1200 bucks more expensive.

Armed with this information, here is what we want to know. Does anyone out there have the mathmatical ability to apply a weighted scoring system to determine the best value per ski?

Please comment or come up with your own or anything. We will try our damndest to try and figure it out too. There has to be a way to determine once and for all the best value / perfomance, etc etc for a slalom ski.

We command everyone to go out to the bookstore or wherever they sell words that are printed on shiny paper, then packaged up in a convienent 8 1/2 by 11 inch pamphlet. Because, unless you receive the Waterski Magazine in the mail, you can't see Tadd's article as it isn't linked on their website. WHAT?

Now, maybe this format won't work, using the arbitrary fist bump method of determining the actual performance value of a ski. Is there a better way to break down a skis variables that can be used in an equation to determine value?

UPDATE: In thinking about our little value system, here is a fairly simplistic equation. For the terms of this equation, we divided the cost of the ski against the median value of the entire group of skis, then, multiplied that by the total number of fist bumps over the fist bumps received. The idea was that you would get a smaller number for the cheaper ski in relation to the group, and then with the fist bump calculation you would get a smaller number in correlation to total fist bumps. therefor, when you multiplied everything together, the smaller your ending number, the more valuable that ski was to the fist bump value equation.

In terms of mathmatics, the equation looks as such.

(Price of ski / Average cost of ski) x (Total number of fist bumps / fist bumps given to ski) = total value for the ski.

Please note, in this formula, the Goode 9900SL Wide Ride was kicked to the curb because it received no fist bumps. In fairness, its similar to the regular 9900, but, slightly wider and shorter.

So, here is the raw data.

Meaning. In our ranking system, the winner is the Connelly Prophecy! Woo! The final rankings for all the skis in the test are as such:

So, there you have it. Obviously this crude valuation system isn't perfect and it obviously weights very heavy on the price and fist bump factor. Which makes sense of course given a small sample size and limited variables. This is notable in the close finish of the D3 X5 and the O'Brien Elite, as they are very different in price and yet with two fist bumps the O'Brien still lost to the X5.