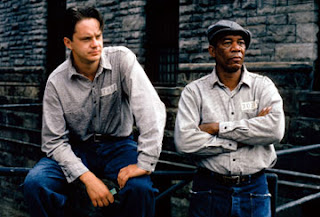 The post below this one, about the USA Waterski poll was initially posted in hopes of sparking some opinions from the peeps, no go I guess, rumor has it the ODBF is furiously pounding away on the lappy with an opinion type piece.

Anyways, after the long Thanksgiving weekend I am sitting here eating turkey burritos and watching a movie. It got me thinking, there are a few movies out there that regardless of when they come on I watch the whole damn thing. One of them is, if you have read this blog for any length of time, is Shawshank Redemption.

So, I felt like posting a list of some movies that, without fail, if they are on when I flip through the channels I watch.

This has over-taken Fear and Loathing in Las Vegas as my favorite movie of all time. Its amazing and everytime I watch it I swear that something new pops on screen I didn't see before or maybe as you get older it affects you in different ways. Regardless, that's what I am watching now.

One that I noticed, was at the beginning when Andy first is working in the laundry Red says something about "This place may eventually get to him" but it doesn't. Then, the night prior to Andy escaping you see Red worrying in his cell about Andy. Had to be thinking that the place finally got to him. Then sure as shit, all Andy's talk is the truth and Red sort of has a realization. Hence...this scene.

SHUT THE FUCK UP DONNY! There isn't any real redeeming or social or message in this movie other then gratuitous swearing and non-sense, I think that's why I like it so much. Plus the relationships between The Dude, Walter and Donny is just awesome.

Plus, I enjoy bowling sometimes and I think at some level all of us would love to have the "pssh, whatevs" attitude the dude has and I think we all know people like Walter. Oh, and meeting Bunny Lebowski with her offer, well, I may find a ATM as well.

Lets make one thing clear, there is some awful acting in this movie. I used the line in our Live-Blog that I have seen better acting from girls faking....err, not that I would know anything about that...you know I have heard.

Anyways, people fighting with swords and plots for revenge, well, that's two things that are pretty damn cool. I suppose there is a redemption aspect to this movie, but, more then anything, it looks cool and sword fights are cool and that weasel emporer guy, grr, he deserves to die anyways.

Plus, his, "My name is Maximus Desimus Meridius..." line is just t.i.t, tight.

Doesn't matter what time of year it is, but, Billy Bob is awesome and I love how he just loses his shit at that kid and...well...all the time actually. For some reason the other day I spent like a 1/2 hour just you tubing Bad Santa scenes for a laugh.

Add to that the fact that A. that little kid is hysterical B. Lauren Graham is a babe and C. GOD DAMNIT...ARE YOU FUCKING WITH ME?

These three movies to me are like listening to Led Zeppelin. I have seen each of them so many times that I can recite it verbatim at the drop of a hat, but, I rarely grab the DVD and play them when I am bored. I don't get it. Like Zep, I have all of their stuff, all the DVD's, everything, and I love it. But, yet, I never seem to find myself listening to them.

However, when I am out and about or in the car or at a bar or whatever and someone plays some Zep, damn right I sign along...well, not sing really, but, sort of, you know, play drums on the table or whatever.

Anyways, its the same with these movies, they are like that. I rarely watch em, but, damn if when I see it on I stop and watch.

So, now Red is walking down the beach and Andy is sanding away on his little boat.

Zihuatanejo!!!
By Rowboat Abides at December 01, 2008
Email ThisBlogThis!Share to TwitterShare to FacebookShare to Pinterest
Labels: get busy livin or get busy dyin...thats damn right., movies, rowboat off topic